About and hour and a half drive due West from Littleton, Massachusetts, up Route 2, you run into the Berkshire Mountain range.  The Berkshires are known for their winter ski resorts and only in the last few years have begun to develop summer outdoor activities.  So we decided to take advantage of those attractions, all except for Sherri who had to work.

On Tuesday, Joanie, Don and Dorothy went up the mountains to run through the tree tops on zip lines. 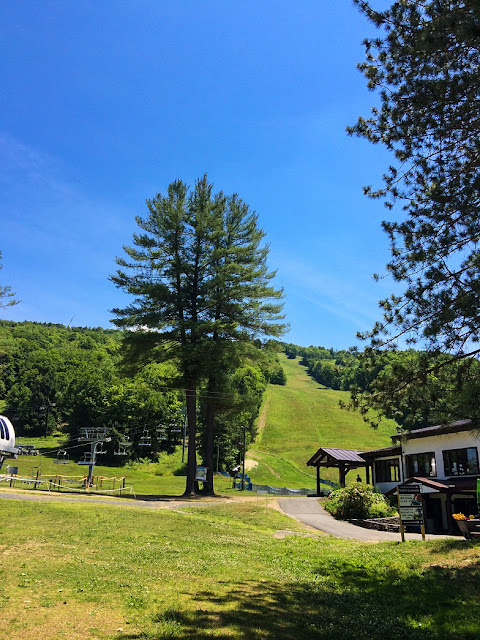 Berkshire East Mountain Resort is a much busier place during the winter months. They have 27 ski runs. 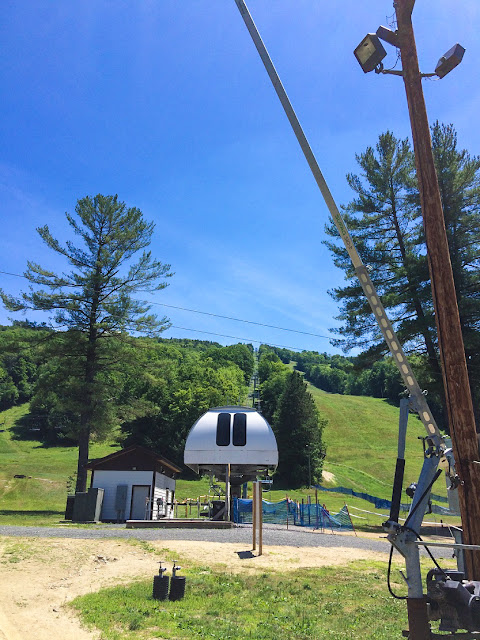 They use their ski lifts during the summer to transport mountain bikers to the top.

This is the view from one of the zip lines. 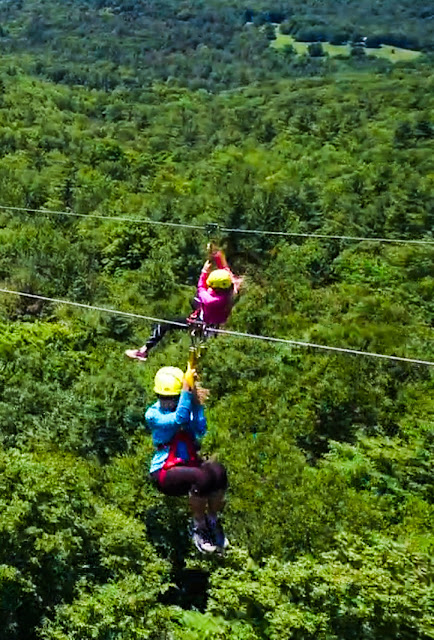 While Joanie, Dorothy and Don were zip lining, Kaylee, who did not weigh enough to qualify for the zip line tour (because zip lines are dependent on mass and gravity in order to work, one has to have enough mass which Kaylee does not possess), stayed in the RV park with me and went swimming. 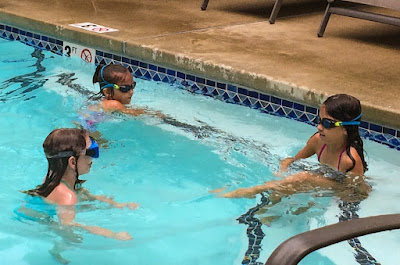 Kaylee met some friends and had goggle party. 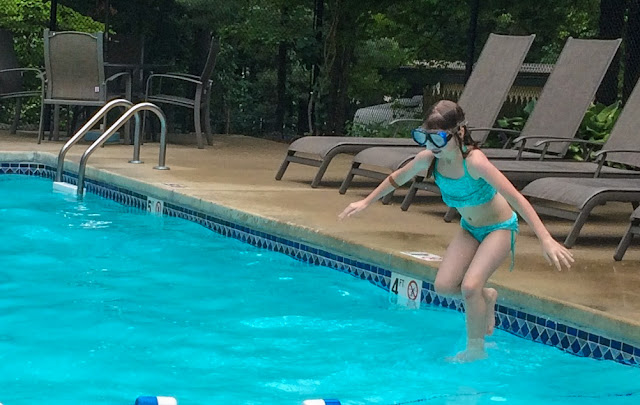 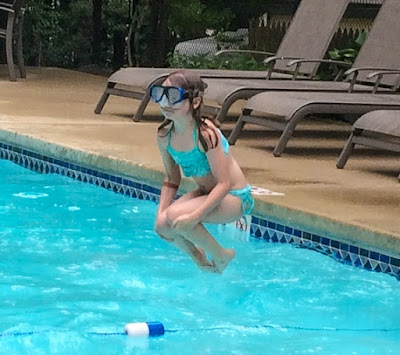 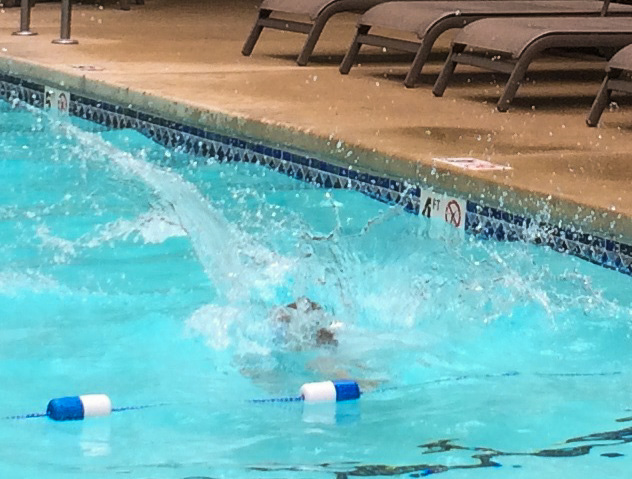 The splash a cannon ball makes! 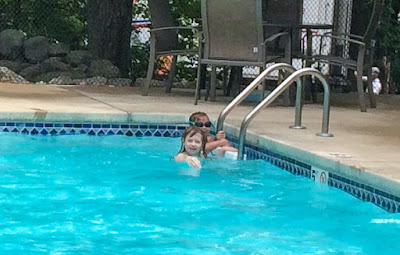 Kaylee is becoming quite a swimmer and is not intimidated by the deep end.
Tuesday night after zip lining, Don and the girls set up a tent outside Phaeth.  Well, mostly Don did the setting up.  Eagle Scout skills still come in handy. 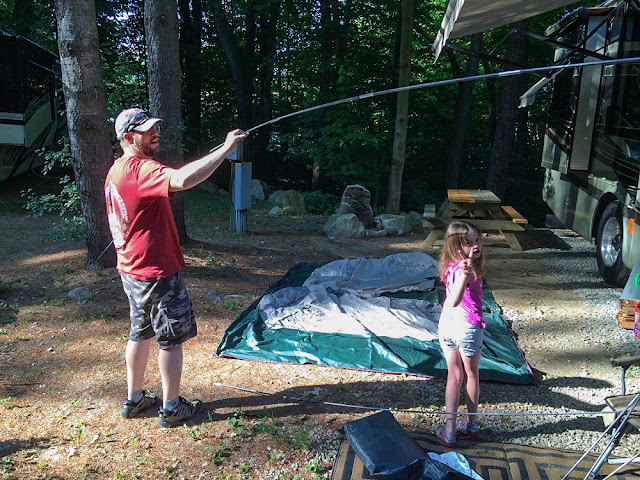 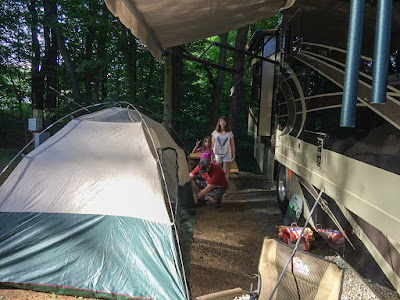 Wednesday we all took off to Berkshire East again; this time to get wet!  It was a perfect day for whitewater rafting down the Deerfield River with bright sunshine and temperatures in the 90's. 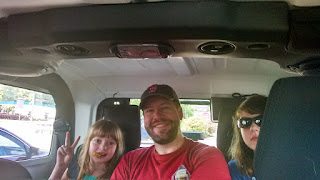 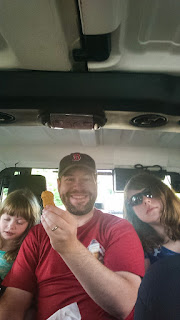 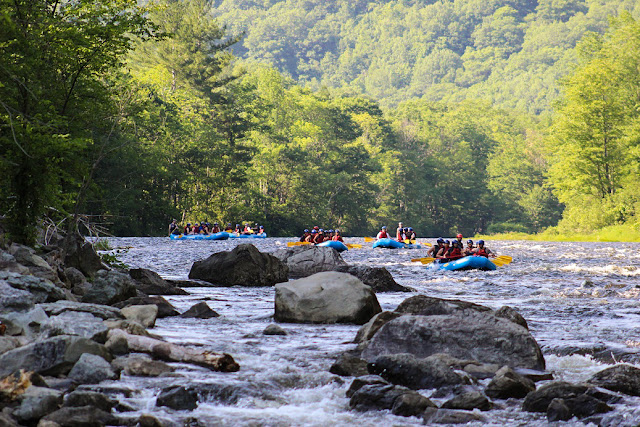 What the photos don't show are the antics in the quiet pools of the river.  There were six boats in our flotilla.  Our boat was commanded by the chief guide and we performed a "stand your boat on it's end without tipping it over" routine.  We all crawled to the stern so that the front end stood high in the air while our guide, Dom, pulled on the mooring line bringing the bow point straight up into the sky. I can attest that the sky was a very vivid shade of blue at the time we performed our stunt.  To get out of our predicament, Dom had little Kaylee climb over us (her foot in my face) to weigh the bow down to a more horizontal level.  I was starting to pray that the darn thing would not fall over on us just when we came back to level.

Another antic was an inter-flotilla water fight.  Each boat was equipped with a five gallon bucket which was used to throw as much water as possible on the crews of other boats.  Paddles were also very good tools which assured that any one who some how managed to stay relatively dry, was now soaked to the bone! 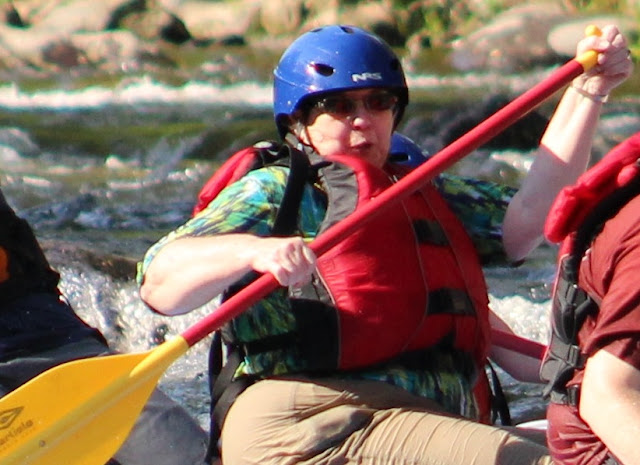 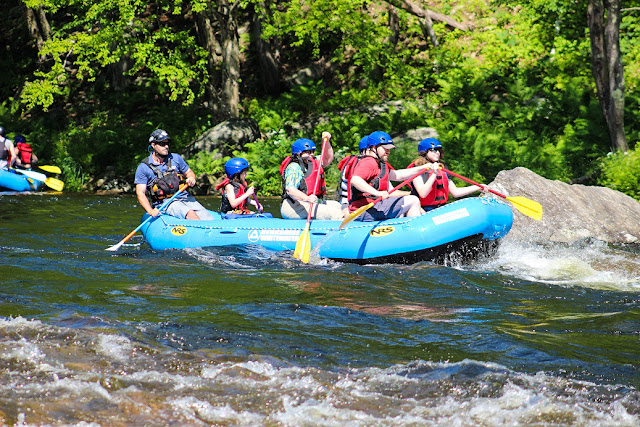 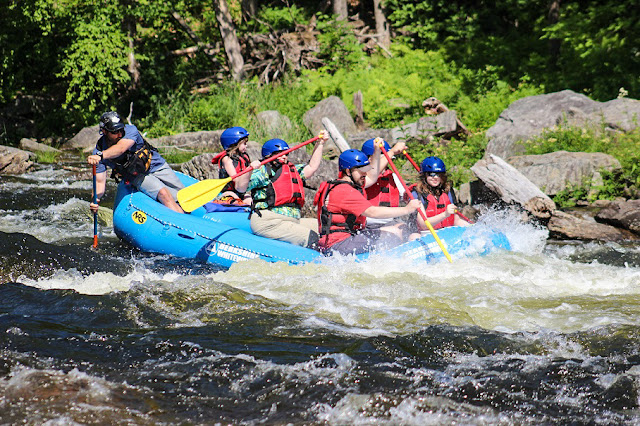 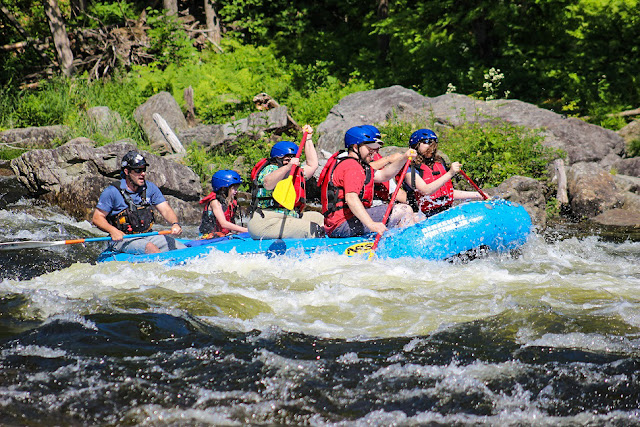 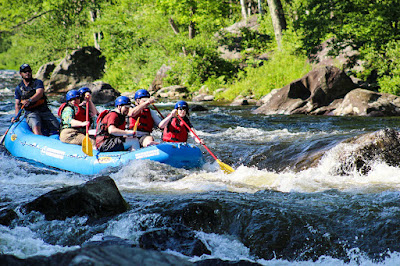 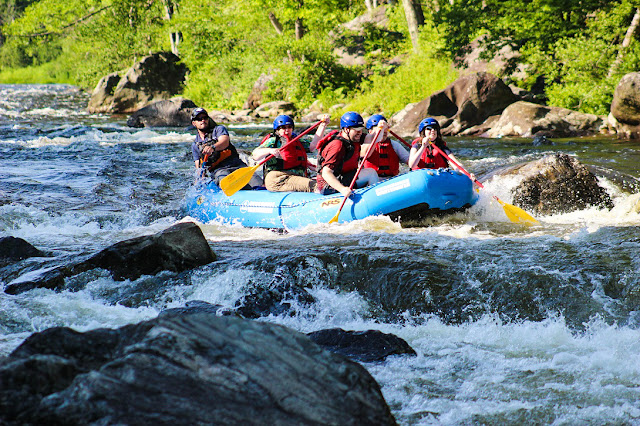 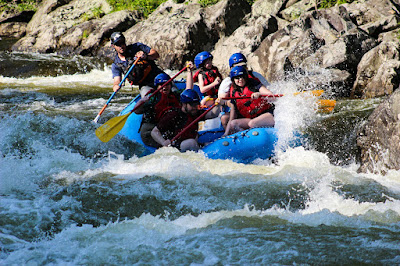 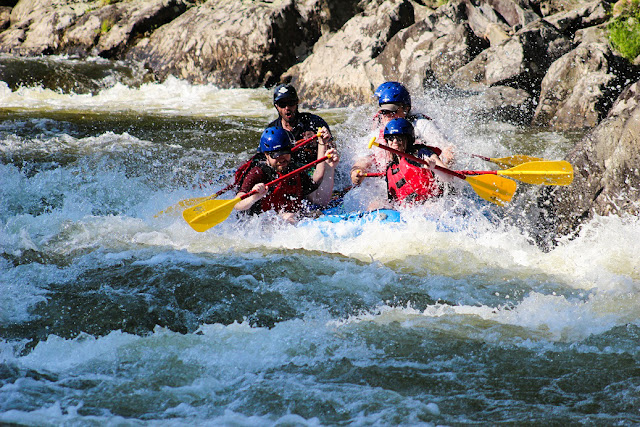 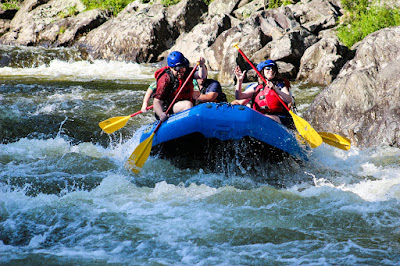 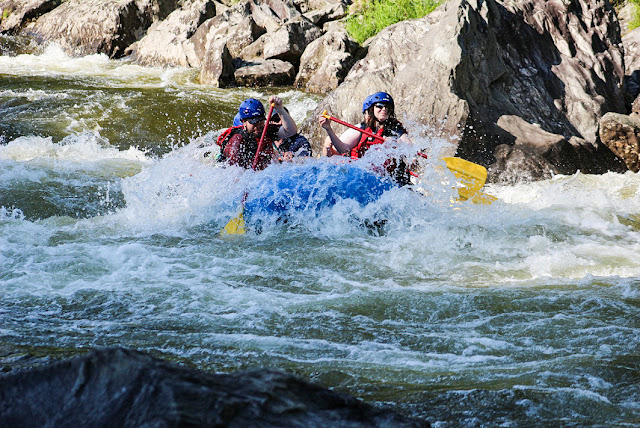 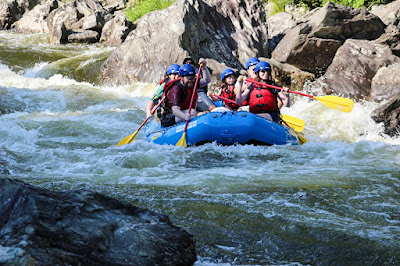 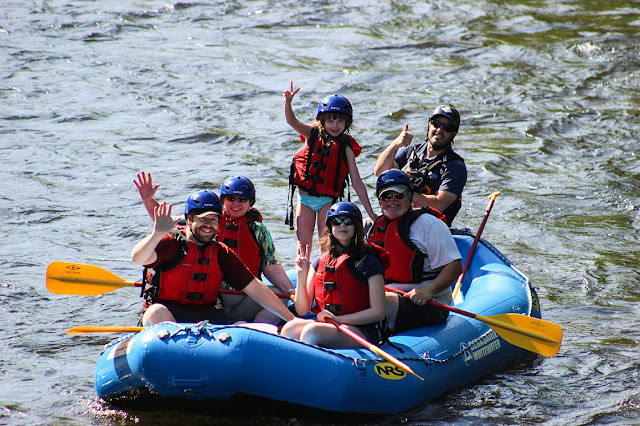 Also not pictured were all the times Kaylee and Dorothy jumped into river and went swimming.

You did not see two crew members on another boat get tossed into the drink when they encountered the last class 3 rapid.  Our boat rescued one of the lost oars while their own crew was able to fish them back into their own craft.

As we were pulling our rafts out of the river, Kaylee shouted, "Let's do it again!".

﻿
Posted by Phaethtofulltime.com at 8:29 AM