Yesterday was the birthday of a very dear friend who unselfishly does so much for other people and so it was time to return the favor on her birthday.  Candle was sort of an "unofficial" foster daughter back when we were foster parents to other "official" foster children. 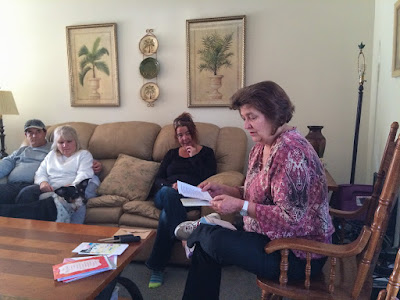 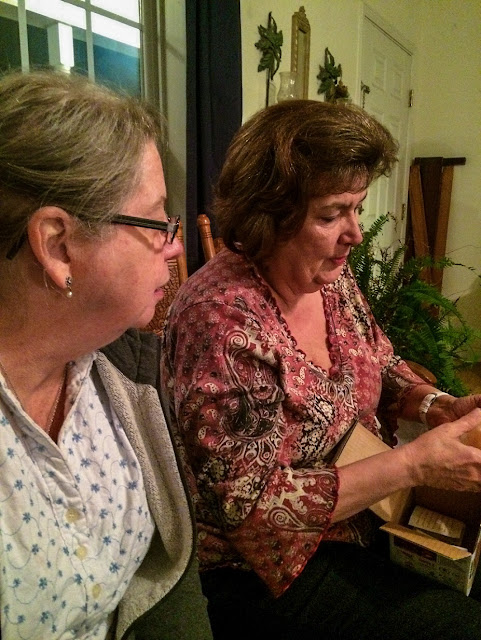 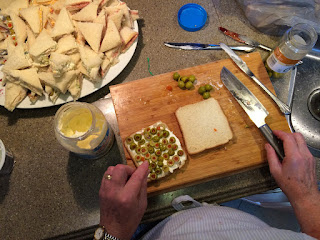 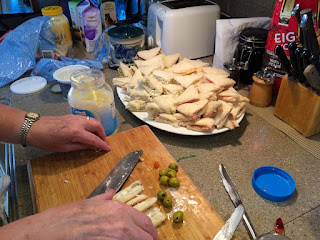 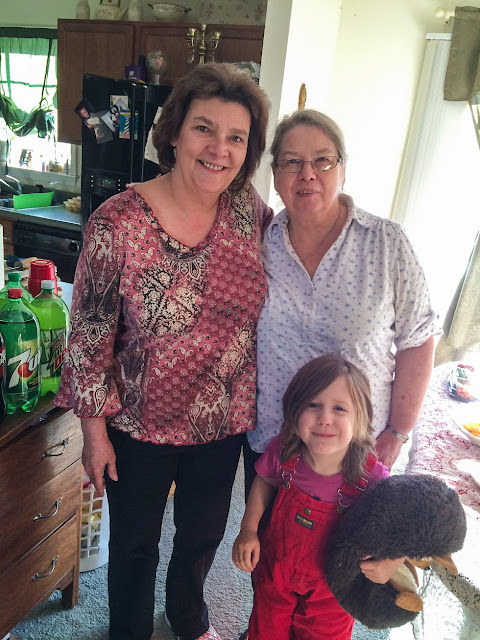 Candle, Joanie and our granddaughter Emory. 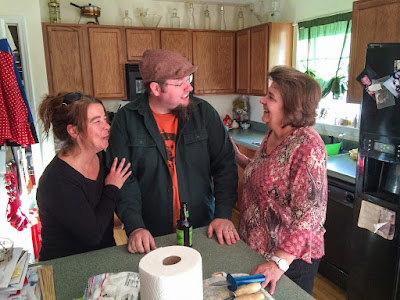 Candle's sister Jeanie, our son Christian and Candle talk "old times".  They grew up together.  Candle and Jeanie and Weelew Graham lived just around the corner from us when we lived in New Bern. You have to remember that computers were just being invented and were not household items back then.  Adventures were very "real", back then. 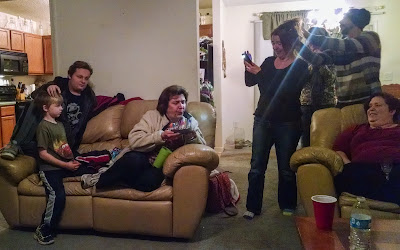 Everyone watches to see if Candle can blow out all her candles. 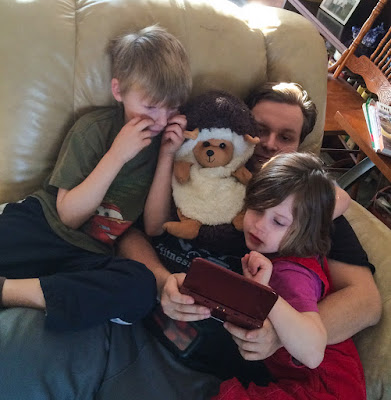 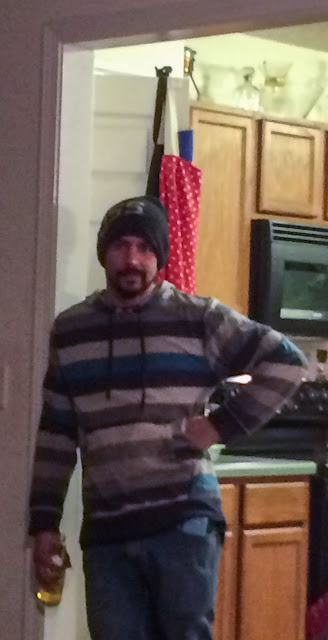 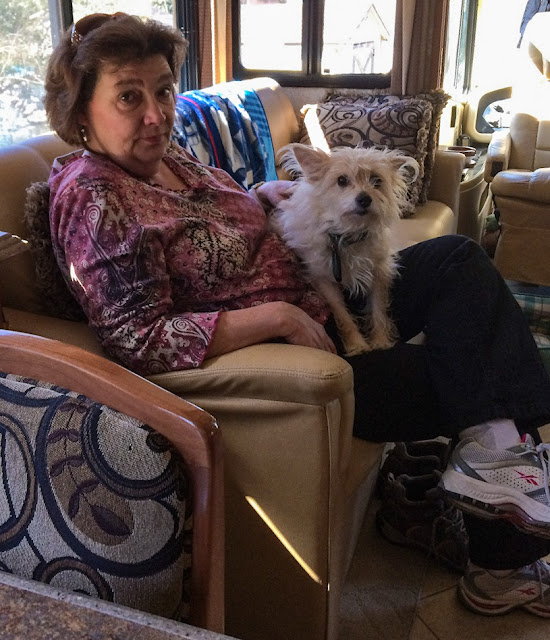 Juniper has adopted Candle as her "official skritcher".  Juniper thinks Candle comes over just to see and scratch her and demands that Candle give her nothing but first-class attention.
Posted by Phaethtofulltime.com at 7:27 AM No comments:

We have been slugging it out with winter for the last week or so.  This morning felt very different so I took some photos with my iPhone camera. 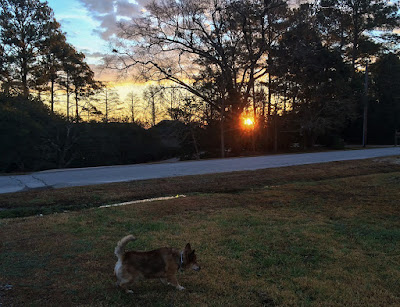 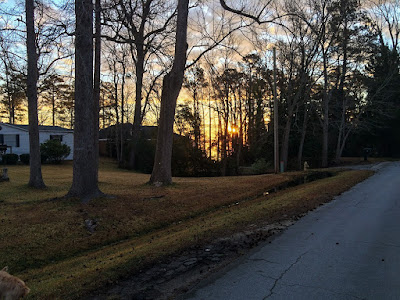 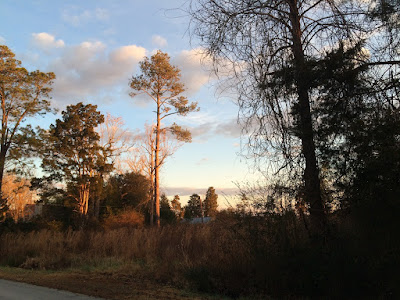 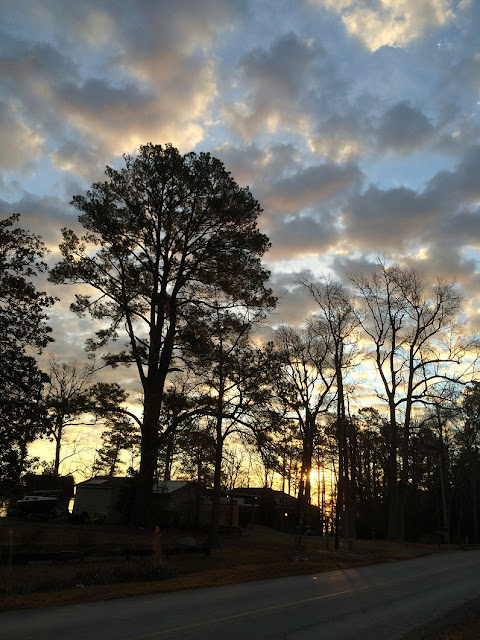 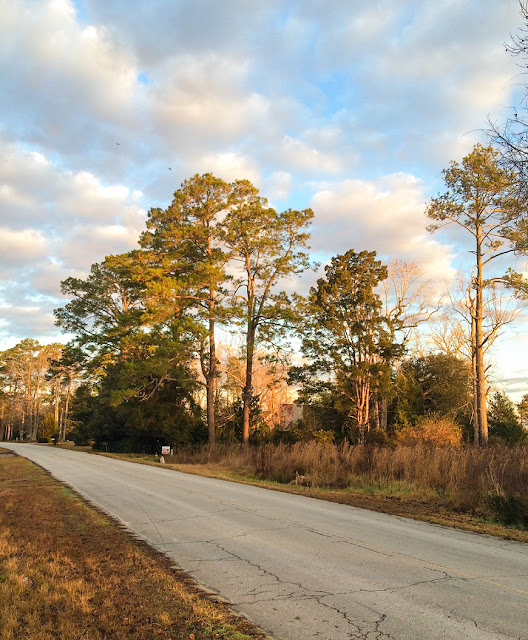 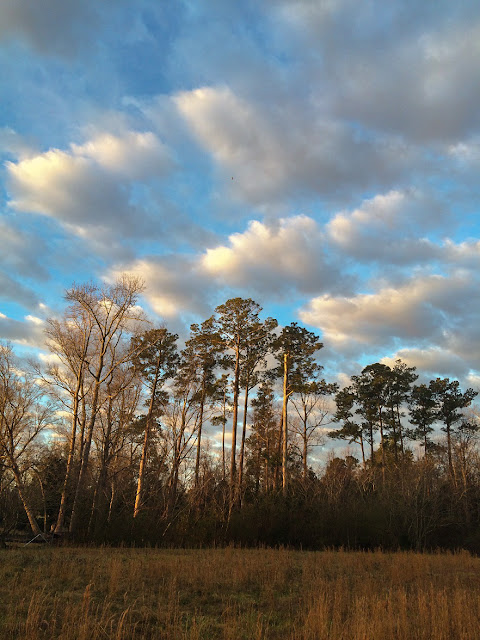 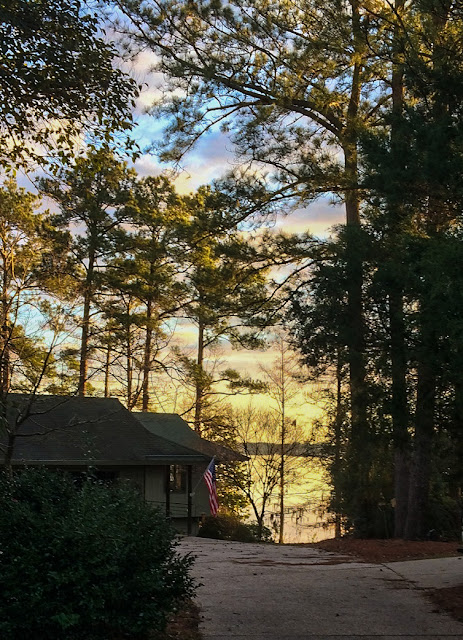 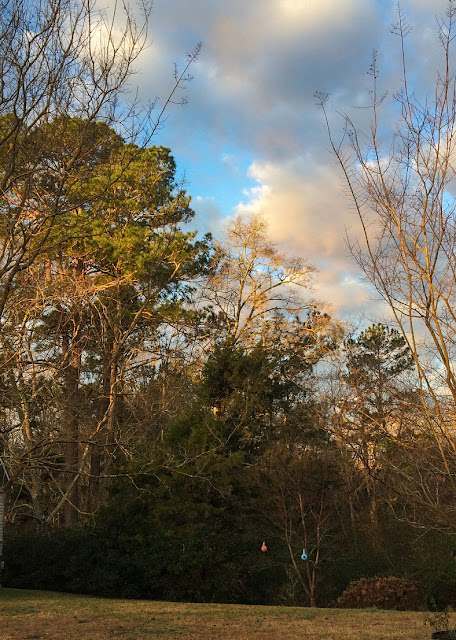 It's the deep of winter now.  A cold rain beats against the northeast side of Phaeth.  We are relegated to the indoors again which gave me some time to do a computer back up and move some files around and tidy up the hard drives.  In doing so I ran across a note I had saved for myself last May and posted it back then when the weather was quite a bit improved from today.

I re-read it and it made me think.  I thought I would share it with you again: 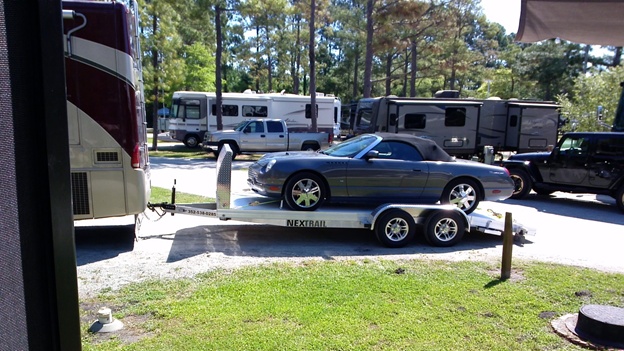 
The man with one leg.


Yesterday, a beautiful 2006 Country Coach Inspire with a shiny aluminum trailer with an obviously pampered Thunderbird convertible on its back pulled in next to us. The driver was a man about my age and his wife.  Joanie was looking out the window because he was unloading his car and the straps were making quite a bit of noise in the process.  Joanie noticed he had only one leg, the other missing from the hip. Sweat was already dripping from his brow and staining his t-shirt and shorts. With crutches, wearing work gloves and one knee pad he moved knowingly about the coach and the trailer to unload the little convertible.


Joanie suggested I go out and ask if he needed help.  I met him over the hood of his Thunderbird and commented on the v-8 power that could really make this little car scoot. He paused and made conversation about staying only one night and wanting to see the sights in Wilmington and I talked about the traffic in Wilmington which I have always thought very bad for a town this size.  Then, not wanting to hold him up I offered help if he needed, just holler next door. He was gracious and said he thought he was OK and thanked me.


I went back to Joanie but continued to watch him out the window “just in case”.   I could tell he knew what he was doing; RVers go through the same routine of setting up and taking down the campsite so often they do it efficiently wasting as little energy as possible. He went through the steps just like any other RVer has a million times. But he did it on one leg; sometimes using his crutches, sometimes sitting on the trailer bed, sometimes hopping about on one foot.  He got the job done.


“We have to remember this man,” Joanie said, “when we start to feel sorry for ourselves.”


They left this morning after breaking camp in reverse routine.


Posted by Phaethtofulltime.com at 8:24 AM No comments:

"Aw they're just a bunch of wusses", I used to think of people who paid attention to the "wind chill" factor. Because I couldn't (wouldn't) get out in the pouring rain to do a tank dump yesterday, I waited until this morning when the rain (I think we got at least 8 inches all totaled from the two day storm) had finally ceased. Standing beside Phaeth waiting for the tanks to drain, the wind howled around me and it did not take long to feel cold.  "Now I do believe in wind chill", I told myself as I climbed back into our warm, cozy motor coach.

We had some wind gusts to 38 mph this morning and the slide out toppers protested.  I still can't quite get used to the sound of the toppers in the wind. 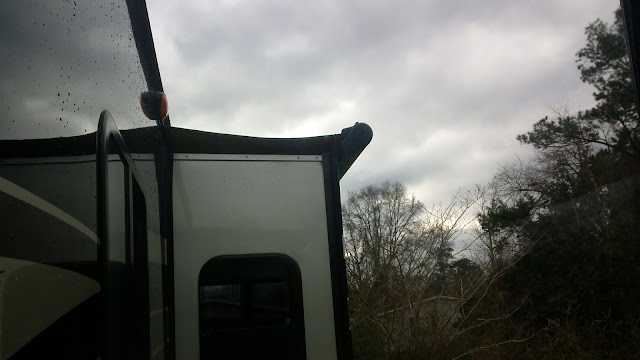 Posted by Phaethtofulltime.com at 7:05 AM 2 comments:

I remember an old folk song that went: 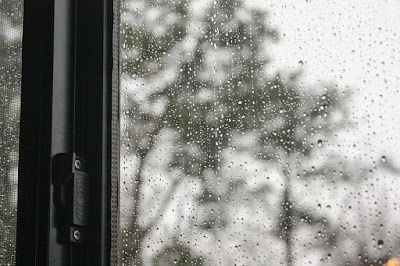 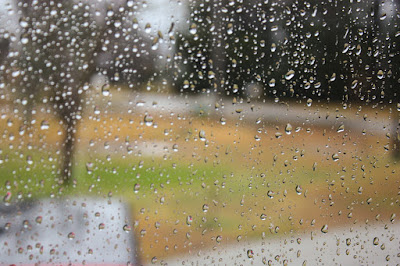 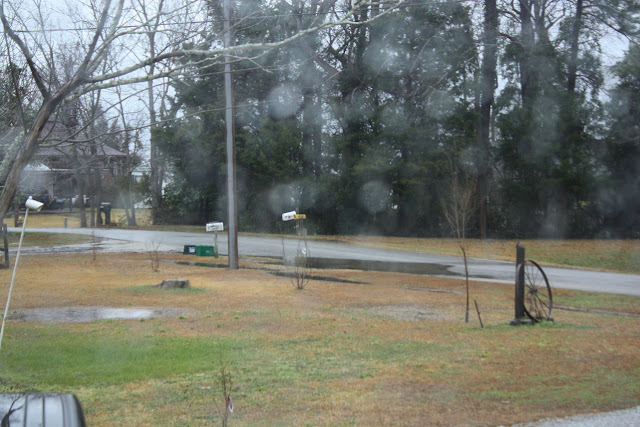 This is what it looks like this morning and will until tomorrow morning.  About as gray as it gets around these parts.  We have had 3 or 4 inches already and will get a few more before it is all over.
Stuck inside so I guess I'll read and maybe do a sketch or two.  (sigh). Oh well...
Posted by Phaethtofulltime.com at 8:01 AM 2 comments: 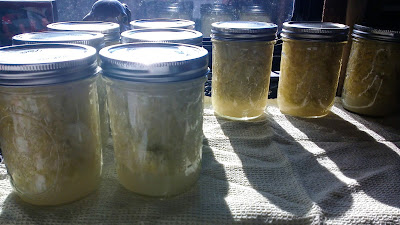 One of the very few things we kept after selling the house, de-stuffing and casting off was Joanie's canning tools.  We have traveled with these in the basement and yesterday we canned 18 pints of sauerkraut. We also carried a 5 gallon earthenware crock in which the cabbage fermented.

About six weeks ago, Joanie went to the local farmer's market and purchased 25 lbs of just harvested Carteret County cabbage.  She chopped it all up and put it in the crock pot with a salt brine solution.  I guess that the fermentation process is carried out by a brine bacterium.

Anyway, yesterday Joanie and I poured the contents of the crock pot into big pans on the stove and  Joanie brought the sauerkraut to a boil and after letting it cool a bit, canned it in pint jars which requires more boiling. Joanie used to can sauerkraut into quart jars but that is a bit much to eat now with just the two of us. 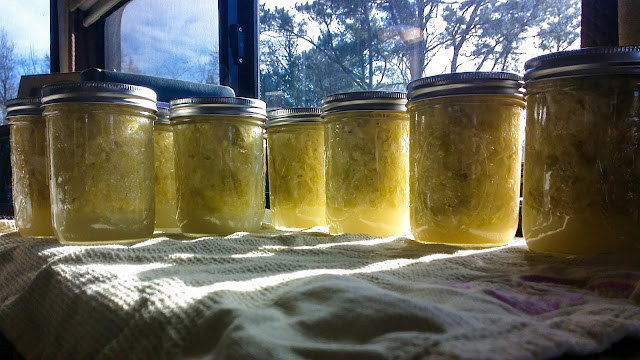 Joanie's recipe is the best!  Store bought sauerkraut pales by comparison.  I really cannot accept the washed down taste of store brands.  Joanie's pork and sauerkraut over mashed potatoes is real comfort food for me!

We don't have the big kitchen we once had but a kitchen project like canning is still possible; you just have to be organized with your space.  Joanie's big wish is for an outdoor kitchen here at Plan B.  I'll let you know when we finish with this batch of sauerkraut.


Posted by Phaethtofulltime.com at 11:47 AM No comments: