It was nice to take a break from almost a month of chores and doctors' visits yesterday at the NC Transportation Museum in Spencer, NC.  We picked up Jacob, our grand nephew who will be traveling with us for the next few weeks, and because he is such a train enthusiast (as are we) we decided to spend some time there.

The Museum was celebrating the restoration of the 611, a Class J steam locomotive.  http://www.nctrans.org/Plan-Visit/FIRE-UP-611!.aspx  The 611 was built in 1950 and is one of a very few surviving streamlined steam locomotives that attempted to compete with the diesel locomotive at the end of the age of steam. 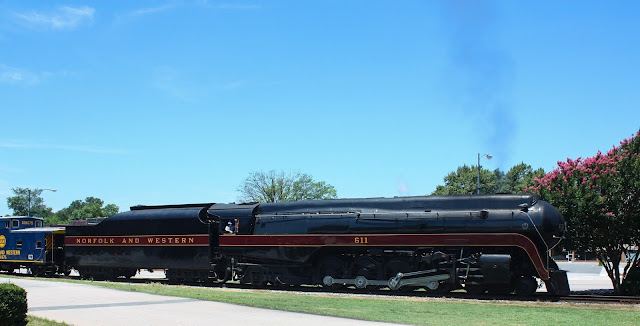 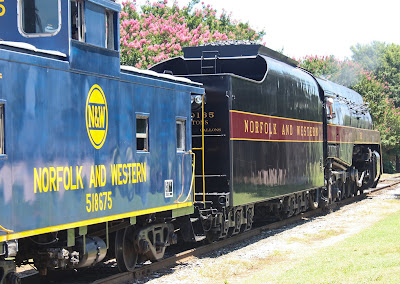 As 611 pulled through the yards, it became the center of attention and had its picture taken by everyone with a camera. 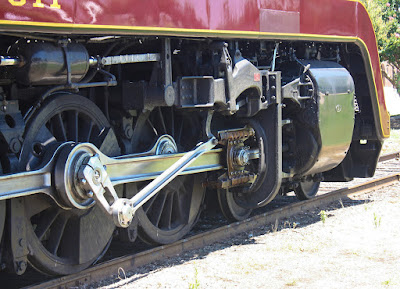 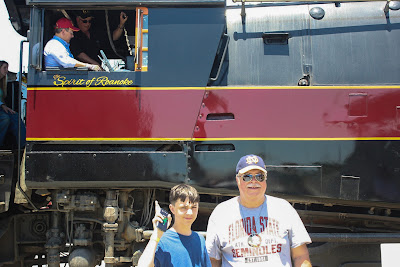 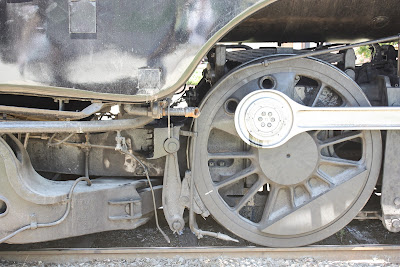 We were greeted by the blast of the locomotive's whistle which made your heart jump in your chest the first time you hear it and Jacob had to cover his ears.  All day the air was tinted with the sweet smell of anthracite coal smoke. 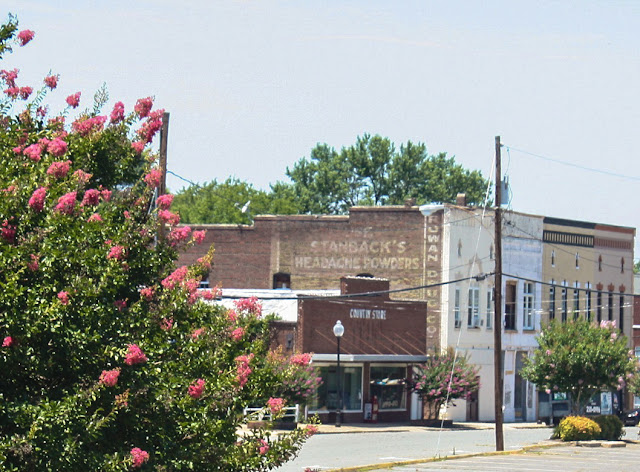 "Stanback's Headache Powders" advertisement can still be seen on the wall of one of the old buildings in downtown Spencer.   In it's heyday Spencer boomed as the rest of the country suffered through the depression of the 1930's.  During the depression other railroads saved money by closing down under-used rail shops and sending their engines and rolling stock to Spencer to be worked on because of it's central location on the Atlantic seaboard. Spencer eventually became just another sleepy little North Carolina town in the 1960's with the decline of the railroads.  The vast majority of buildings in town are vacant. 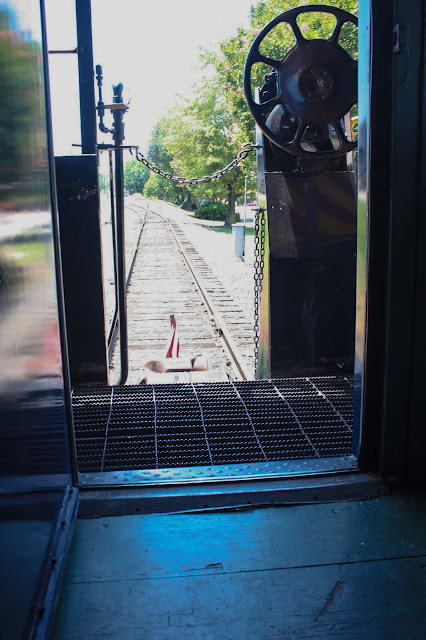 View out the back door of the caboose we rode in.  Tickets were just $10.  For the more wealthy enthusiast, a ticket to ride in the engineer's cab could be had for $611 and they were sold out all weekend. 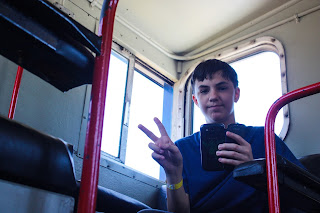 Jacob rode in the cupola of the caboose. 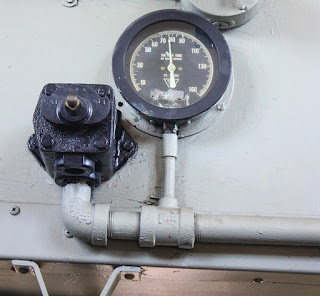 The locomotive's air compressor provided the pressure to operate the air brakes on the caboose.
﻿ 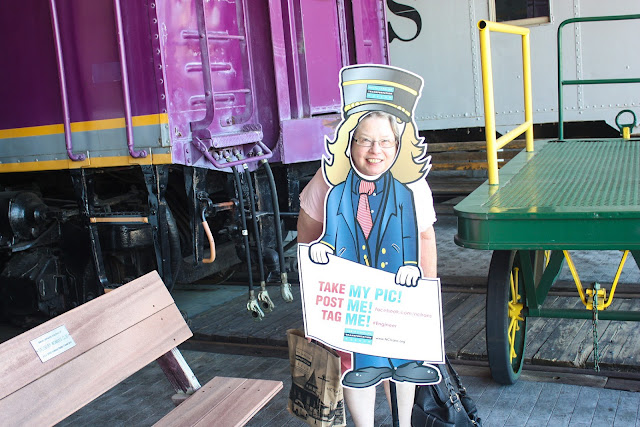 Joanie let me take her picture.
Over in the round house we viewed some of the other rail exhibits.  The NC Transportation Museum is one of the largest of its kind in the country and has many exhibits of all other kinds of transportation history including a Wright Brother's glider and lots of old automobiles, trucks and some boats. 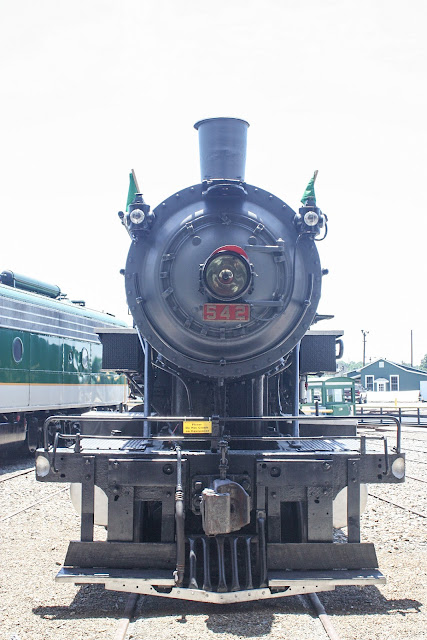 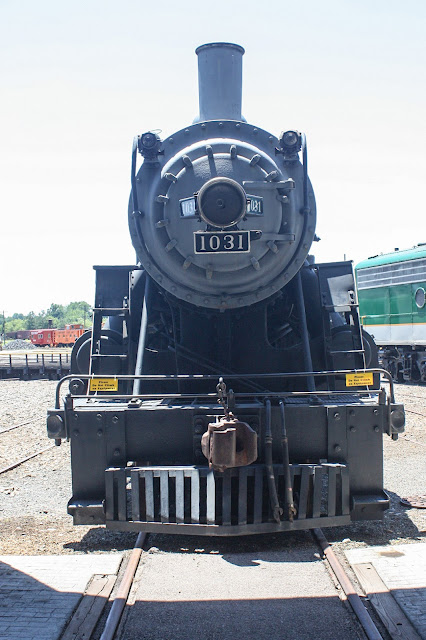 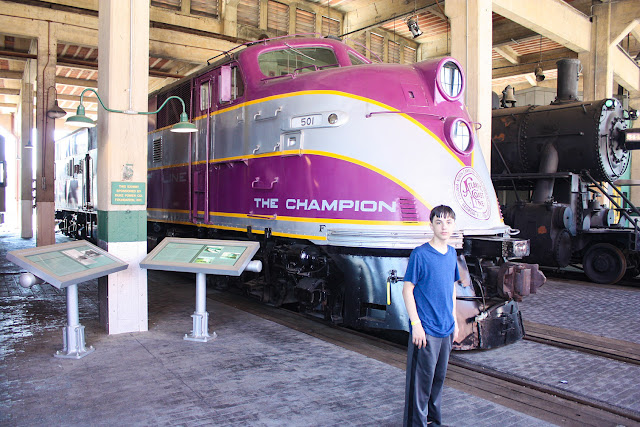 Posted by Phaethtofulltime.com at 7:45 AM