A little moment of anxiety

After Mass on Saturday evening we went to dinner with some old friends at church to say goodbye.  Yesterday, Sunday, we cleaned the "house" including washing the windows outside.  It was a beautiful day of dry, "almost fall" weather, about 85 degrees. We had just finished up, walked the dogs and were just about to feed them and watch some football when the air conditioners went off. 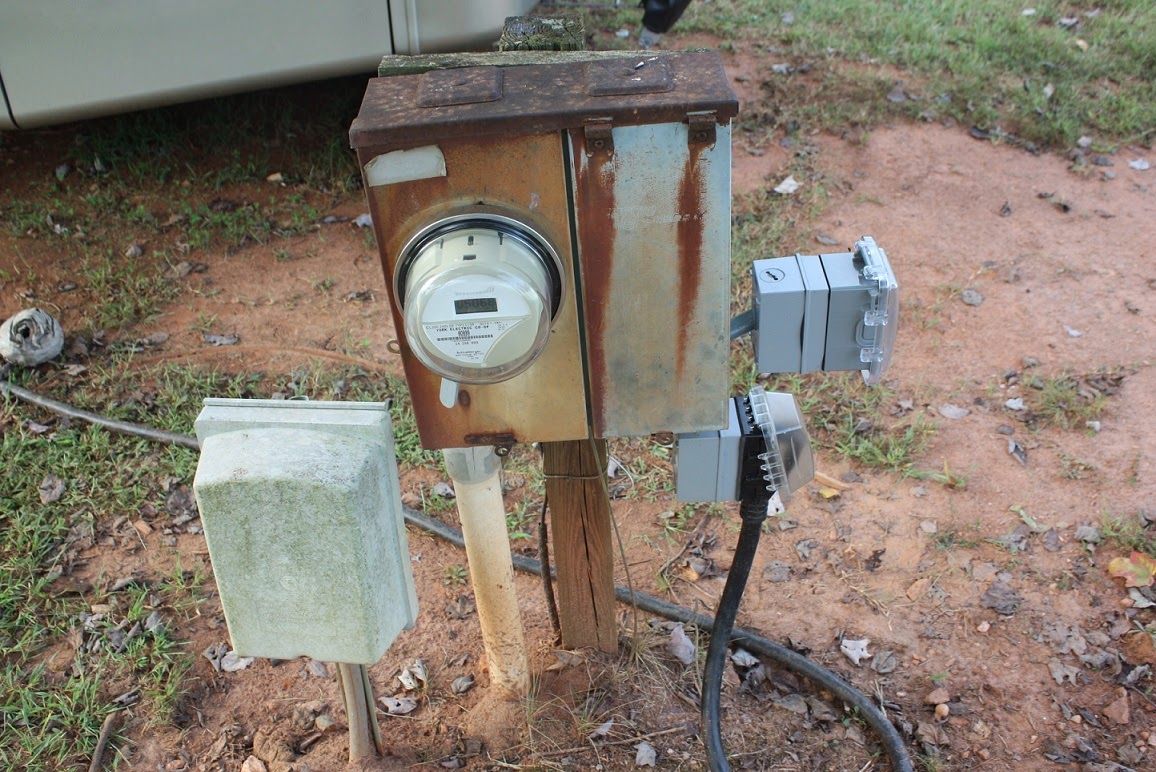 "Almost new". Really? The 50 amp receptacle is newer looking but the rest of the post looks like something from the Great Depression. 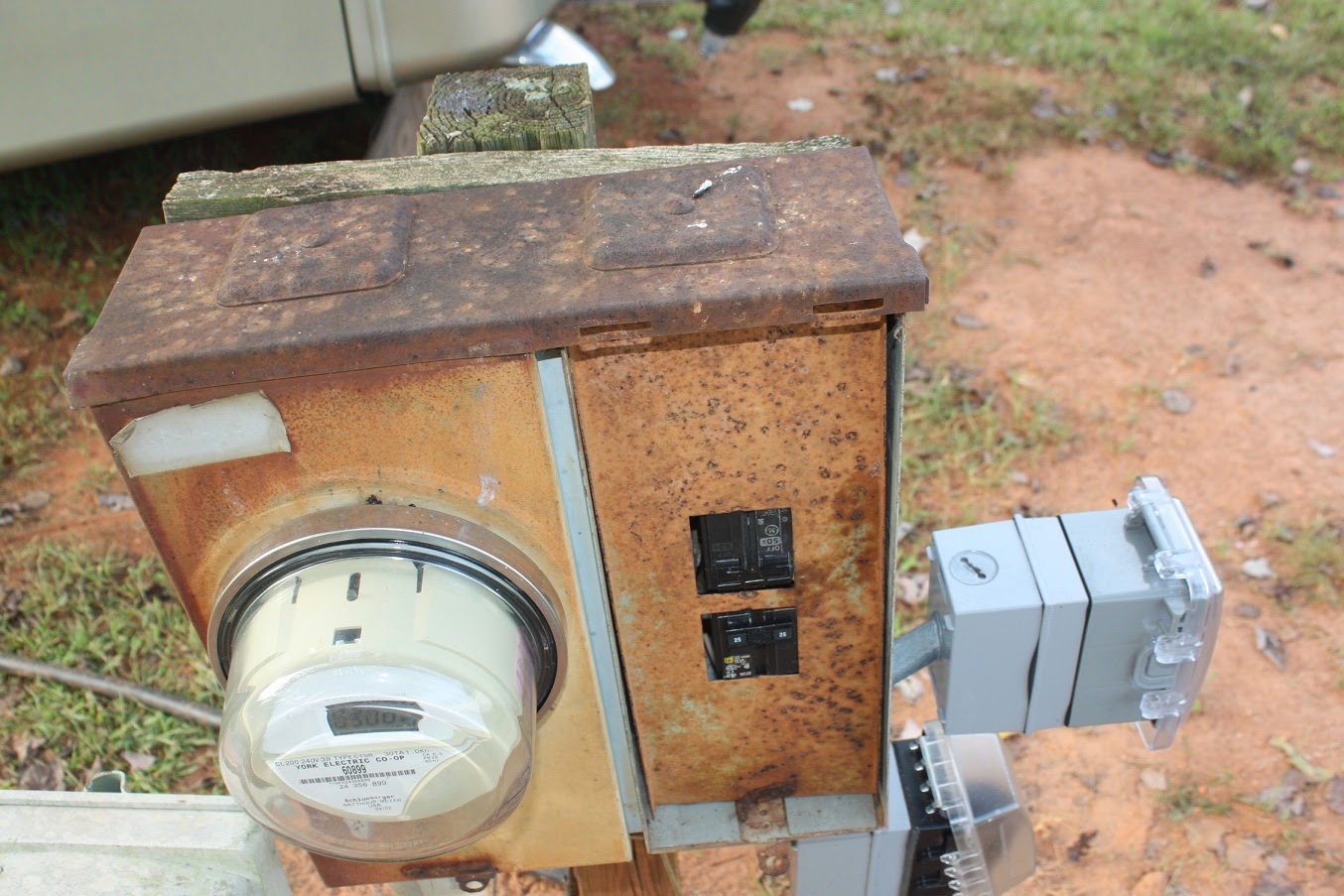 Two years old? More like two decades! When the maintenance man was here I peeked over his shoulder to see inside the box.  To me it seemed the wiring was substandard for 50 amp service.  12 gauge wire where 10 ga.or even 8 ga. would be better.

So yesterday I flipped the breaker full off to reset it and then on as I had done so many times before. Only this time the power did not return to Phaeth.  I opened the 120V electrical bay and saw that I had only one red led light on the Surge Guard.  My volt meter showed no voltage on the load side of the Surge Guard. Head scratching time. I went to my computer to look up the trouble shooting manual for the Surge Guard and read that one red light meant that there was an open conductor.  In other words, one of the two circuits that feed the electricity to the motorhome was disconnected. 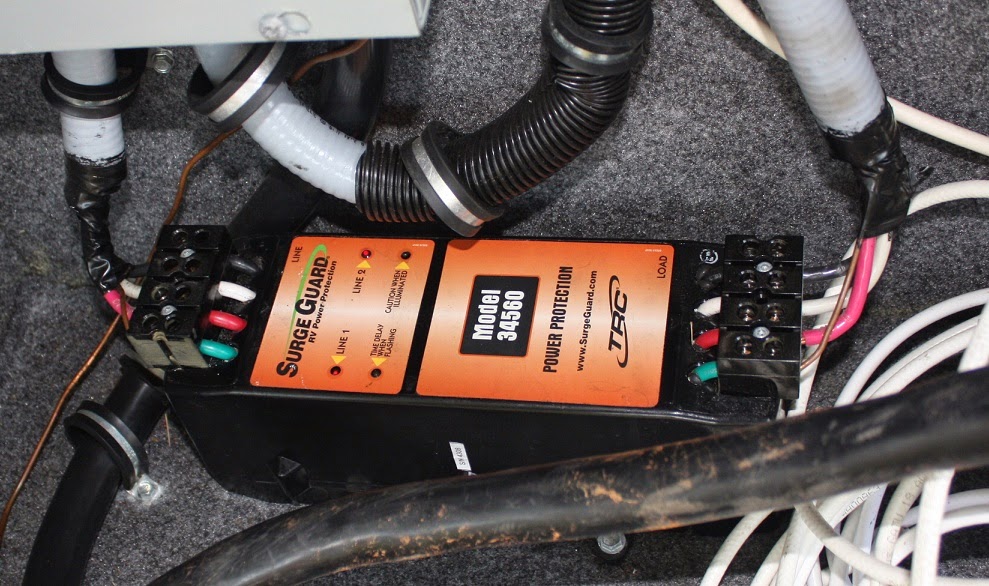 The Surge Guard has status lights that indicate conditions.  This is not a standard piece of equipment on RVs but I think it should be because the electrical supply at most RV parks is way too suspect. 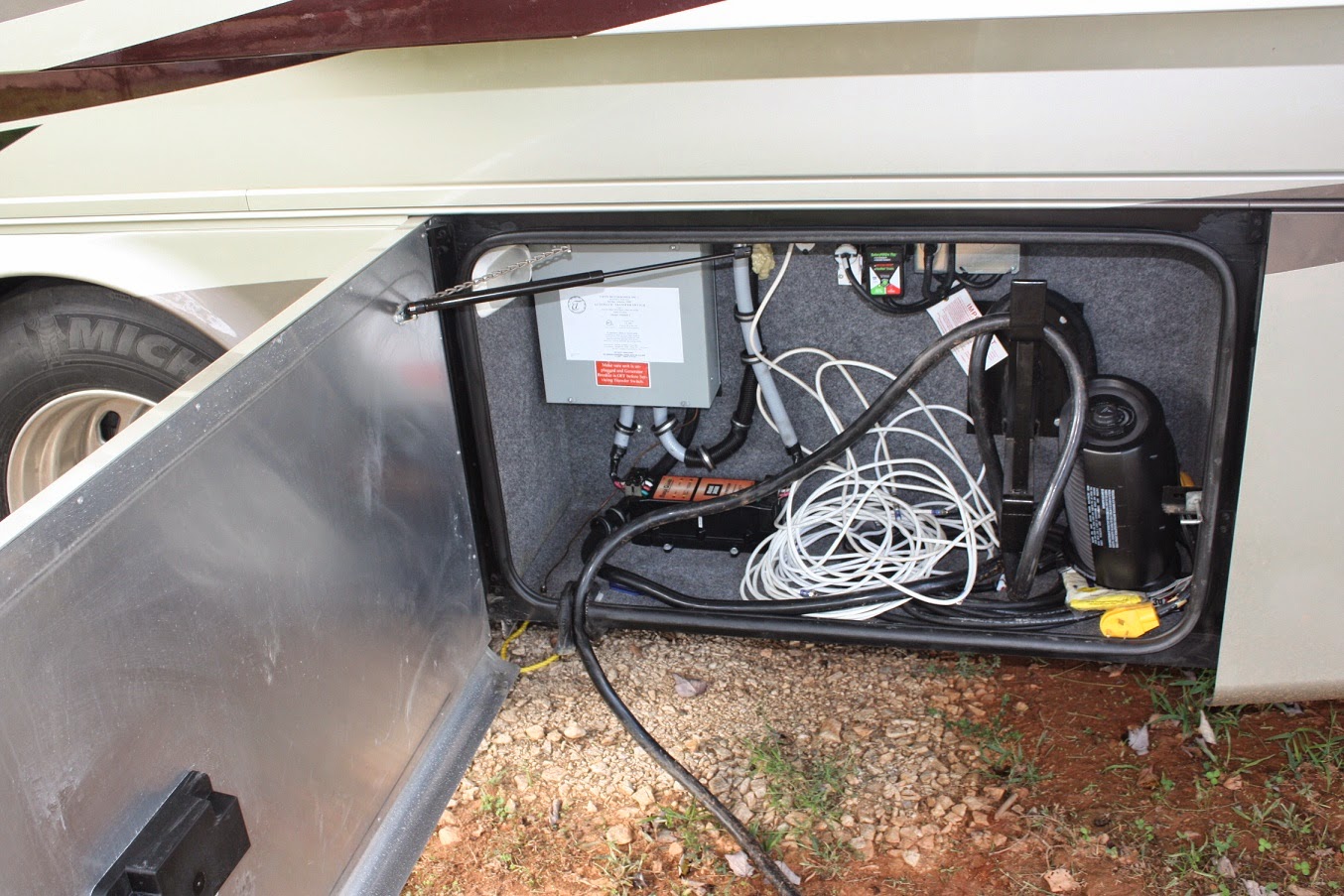 The 120 volt electric bay is just behind the rear axel on our motorhome.  Besides our shore power cable (big black line) it also contains the hook ups for cable TV and satellite tripod.  It also houses the automatic transfer switch (gray box) which selects from generator or shore power.  It also houses the Battery Minder that keeps our coach batteries topped off.  Also stored here (lower right) is a space heater we just loaded and might (might? You mean WILL) need this winter in the coach.  The little yellow device is a "dog bone" which can be used to access electricity from a 30 amp outlet if 50 amp is not available.

To confirm this I probed the post's 50 amp outlet with my volt meter and sure enough, only one circuit was working.  That meant that there was a wire that had come loose or the circuit breaker had gone bad.

I also wanted confirmation from my Surge Guard so I cranked up the generator and the Surge Guard showed normal operation and the AC cooled us off.

Whew! What a relief!  The problem was not Phaeth.

That could only mean one thing!  The campground was at fault.

I called the maintenance guy who came out right away, replaced the 50 amp breaker and tightened all the connections.  He didn't stick around to tell me again how "new" the electrical stuff was.


Posted by Phaethtofulltime.com at 7:27 AM