It's About Family Now

The drive from Lexington, South Carolina to Sunset Beach, North Carolina was mostly in the rain.  I  don't mind driving in the rain as long as it isn't heavy rain.  I prefer overcast skies much more than bright sunlight as it is less fatiguing on the eyes and Paeth doesn't heat up inside.

I had one of those quick panic moments when on US76 we went under a railroad bridge that showed a 13ft 8in clearance warning sign on it.  We are 12ft 8in at the top of the roof air conditioners. We have a couple of CB radio antennas a little higher but they are on springs.  I have subconsciously always checked to see 13ft on viaducts and knew that that was our "mark twain".  But if the road had been resurfaced a couple of times and the department of transportation had neglected to change the sign, we could "scrape top" or worse still, knock all the stuff off the roof or even rip the roof off.  I backed off our speed quickly and hoped we made it.  Afterward I had time to think that if the semis made it, I would, too.

When we arrived at our camp sight in Sunset Beach it had already been raining hard here for two days due to tropical storm Bertha.  The camp is semi flooded.  The interior roads at the campground are dirt/light gravel and a mess. 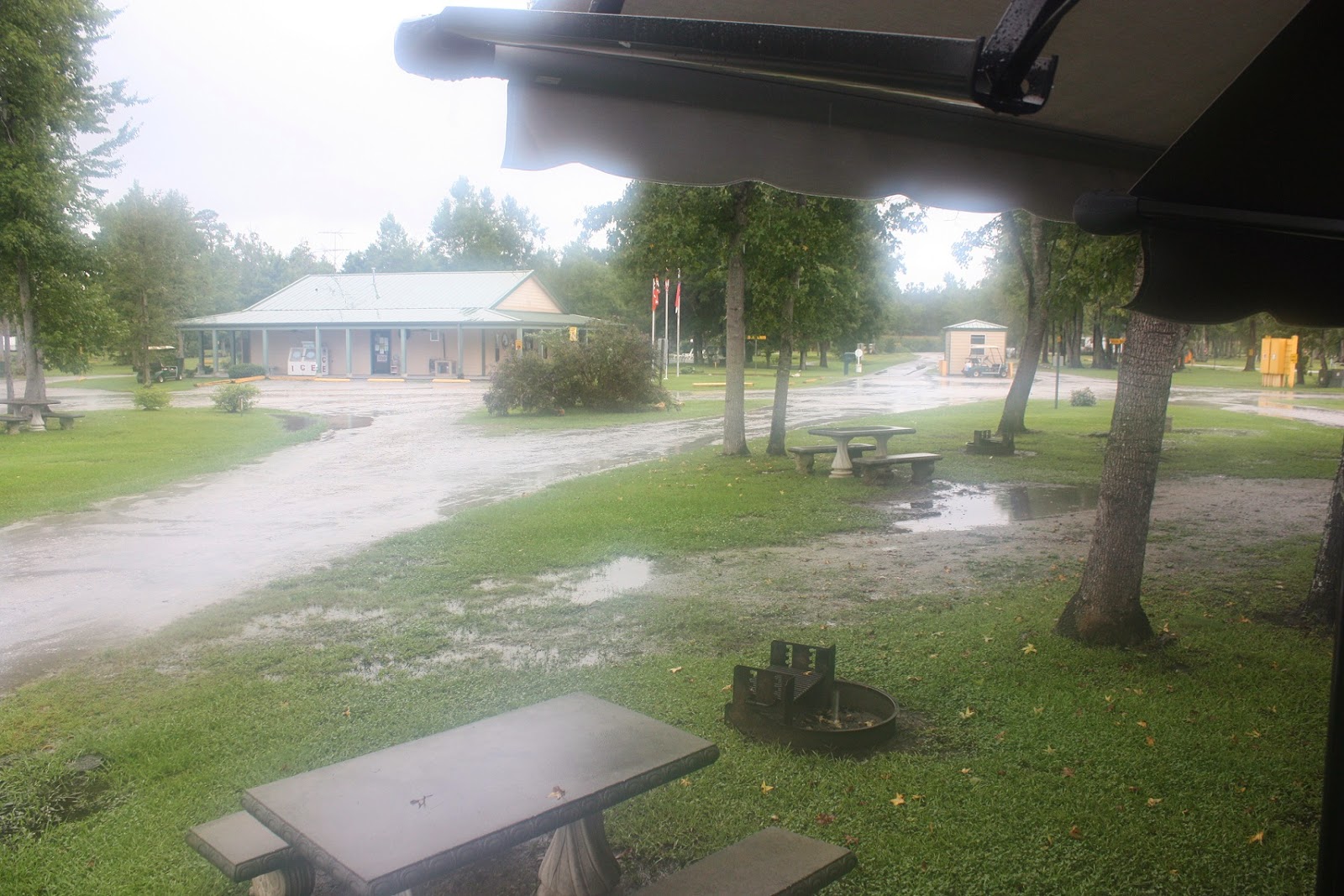 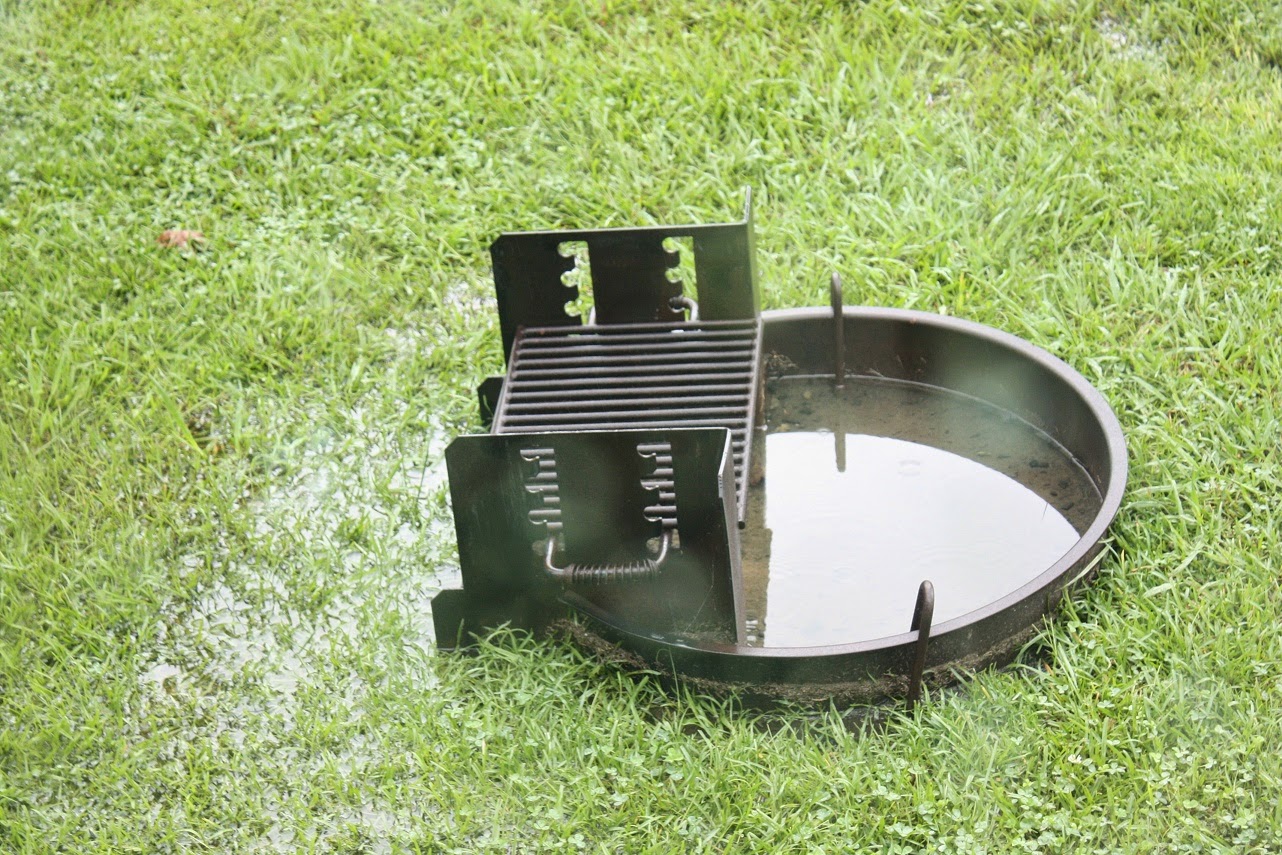 This is a fire ring.  It is where you can have a camp fire or cook out if you want.  Kinda hard to light a fire in 4 inches of water. 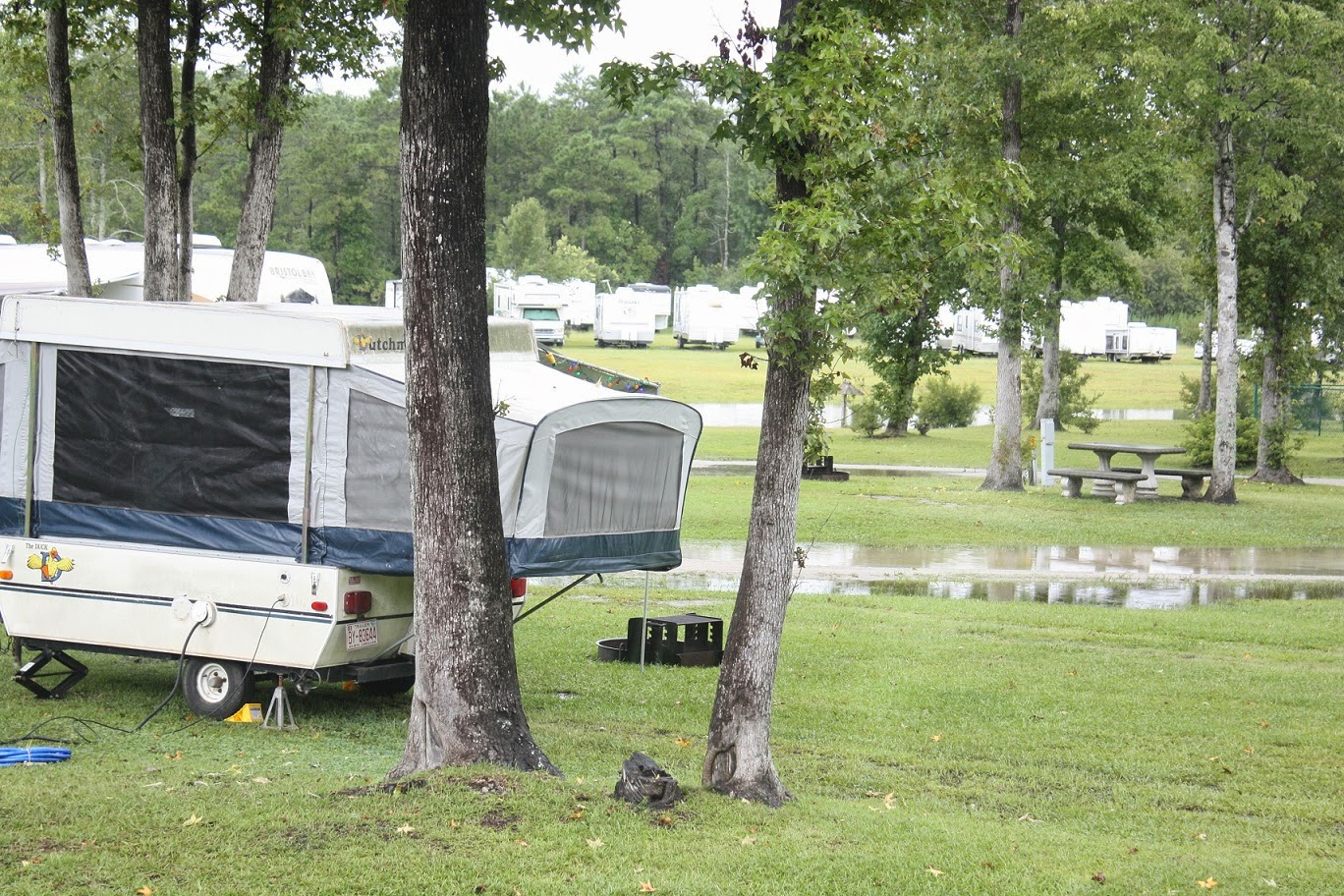 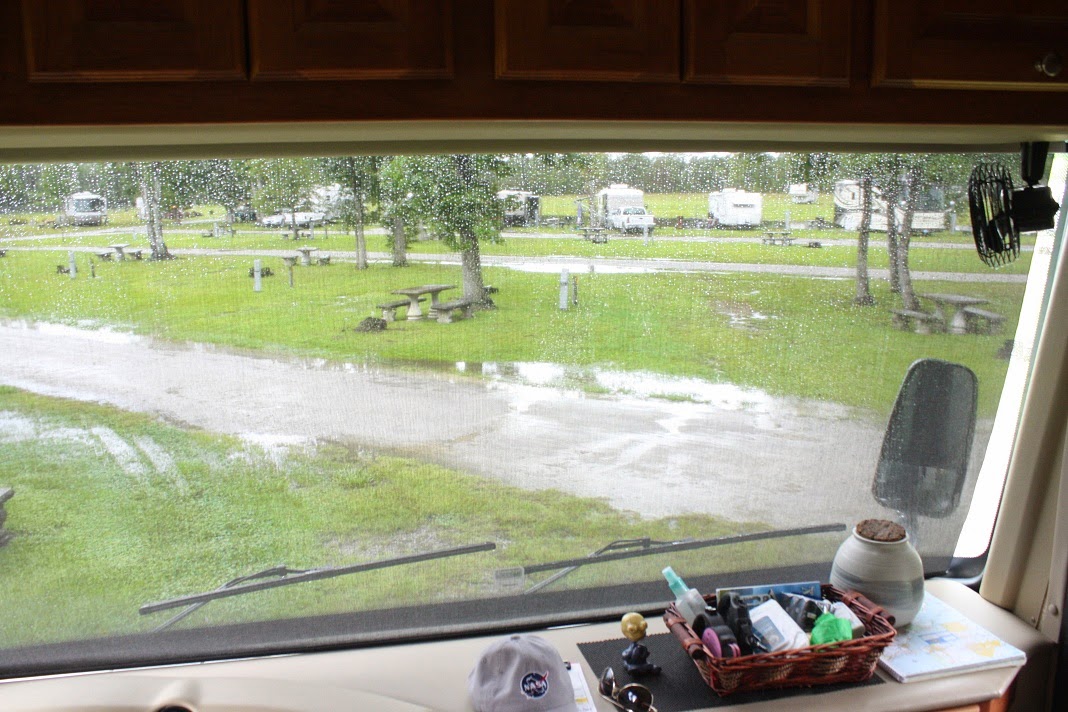 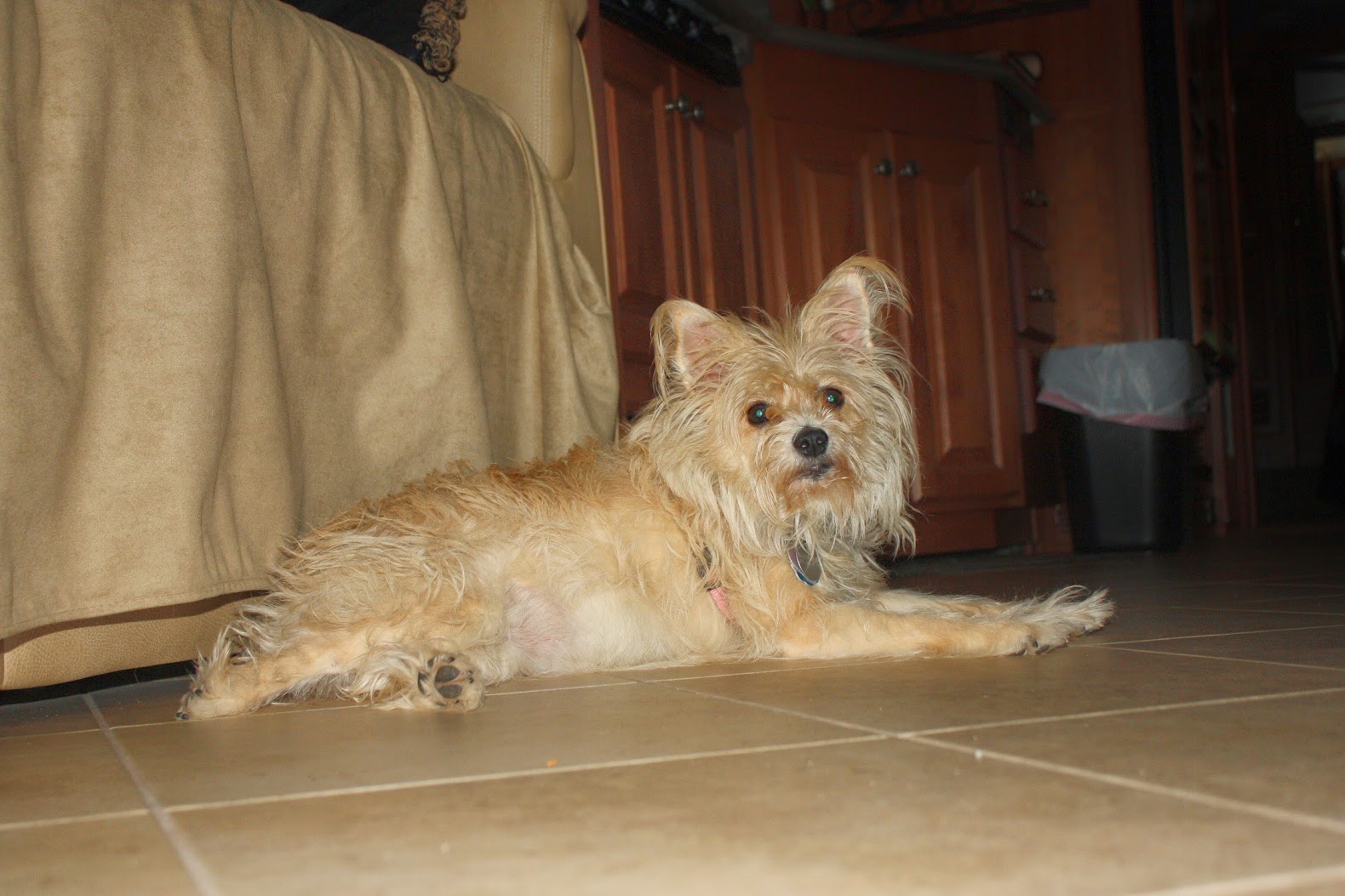 Juniper wants to know why we can't go outside. 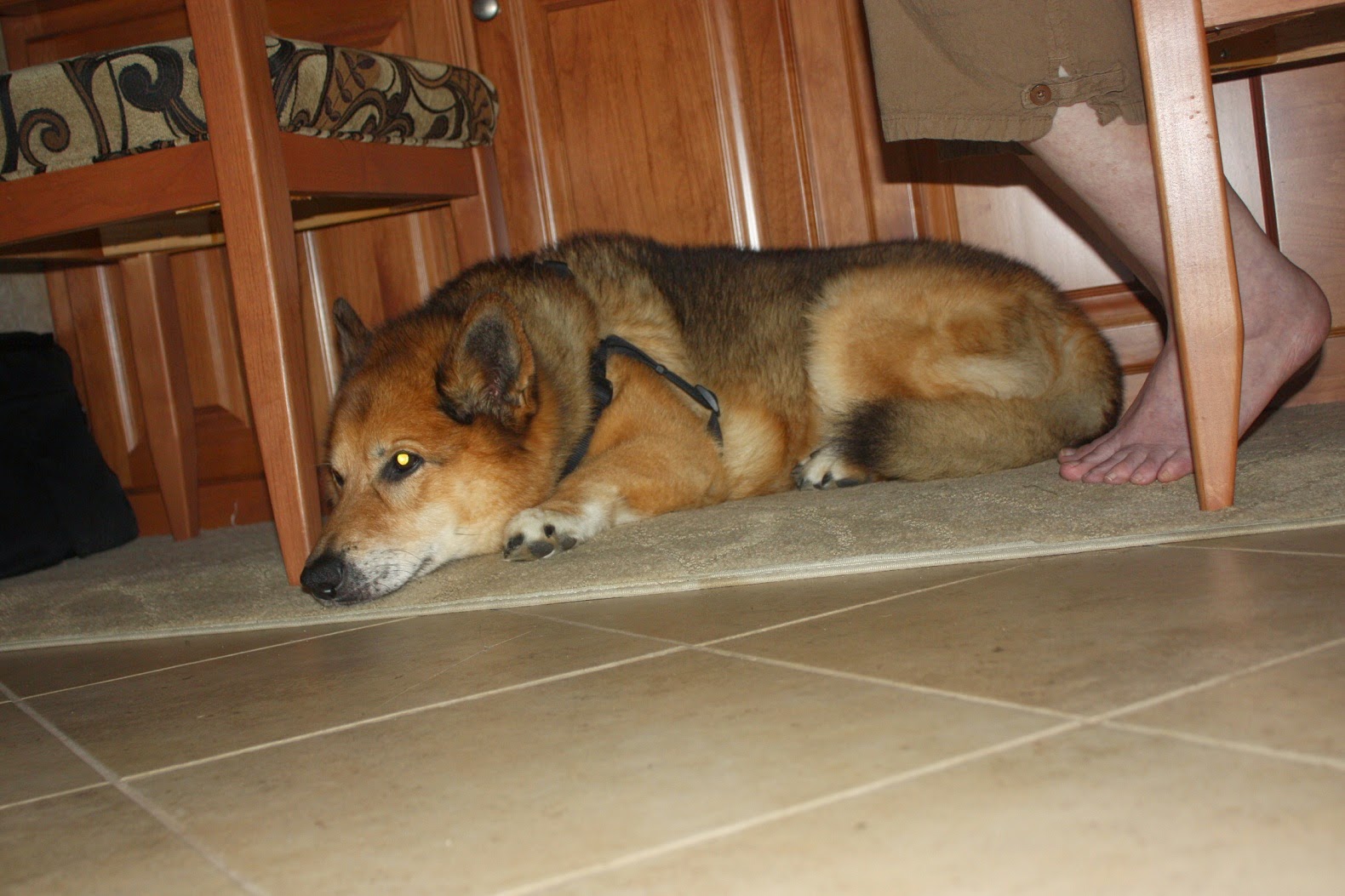 "He won't take us out in the dang rain", says Lobo.
Our second day here, with Bertha still off the coast, the kids came to visit. The day was all about family.  Our older son, Donald, and his wife, Sherri, and two daughters, Dorothy, 10 and Kaylee, 6 arrived at the camp ground for a visit. Our younger son, Chris and his wife, Katie, and our grand son Deaglan who will be 6 in October and Emory who is the youngest at 3 then arrived.  Joanie and I were in our glory hugging on our babies. 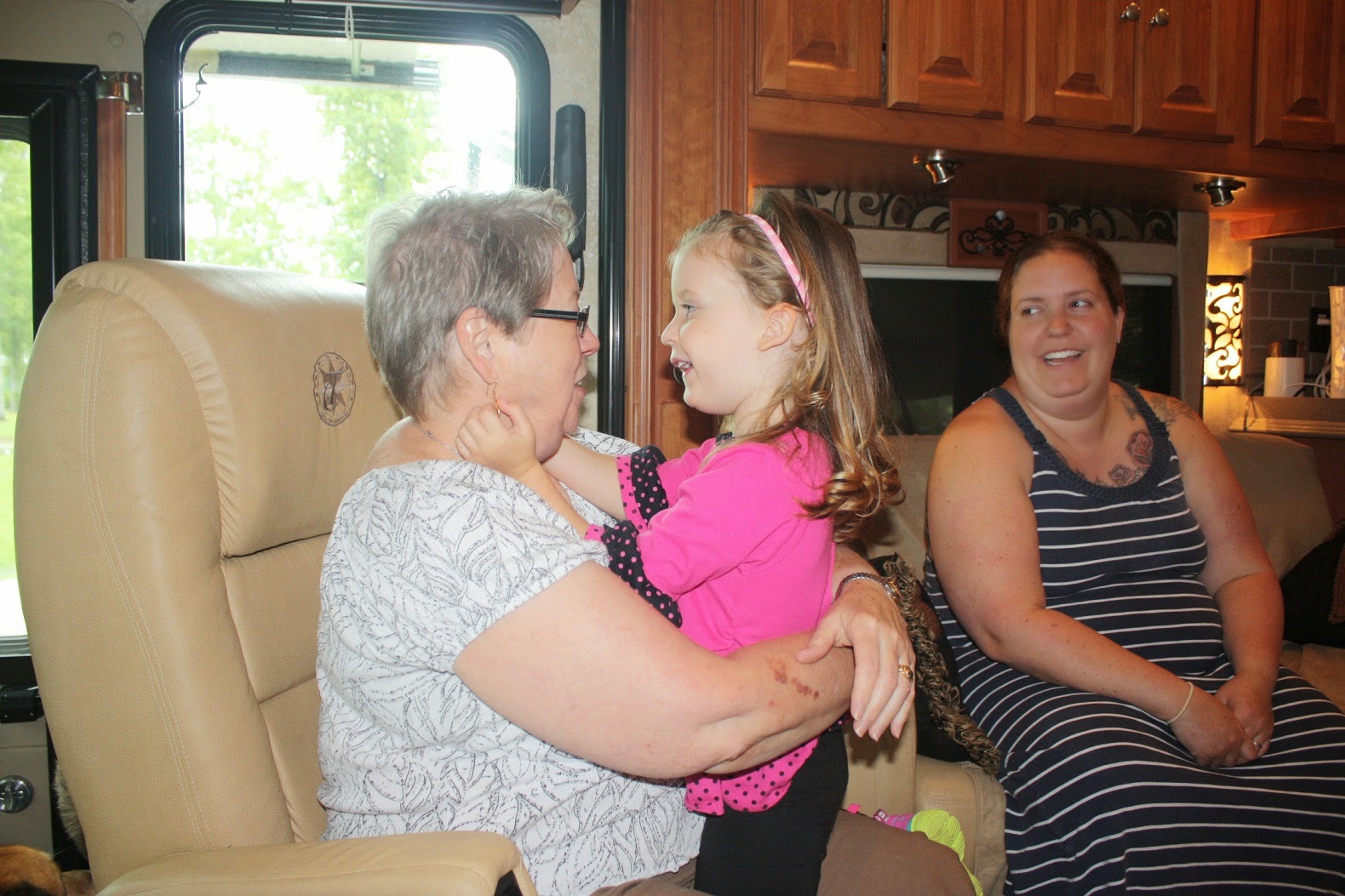 The youngest, Emory, on Joanie's lap with her mom, Katie, looking on. 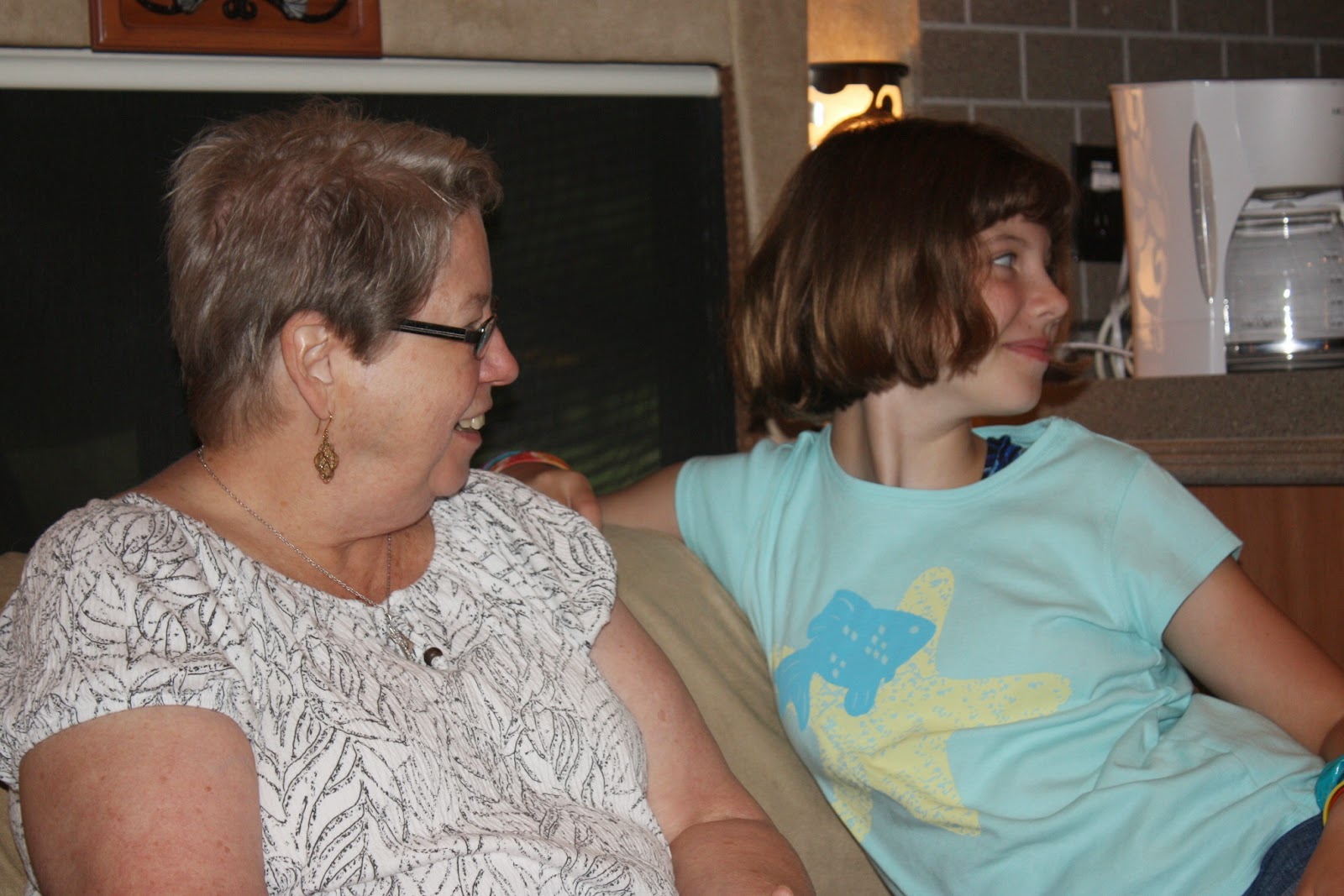 Dorothy is the oldest grandchild. 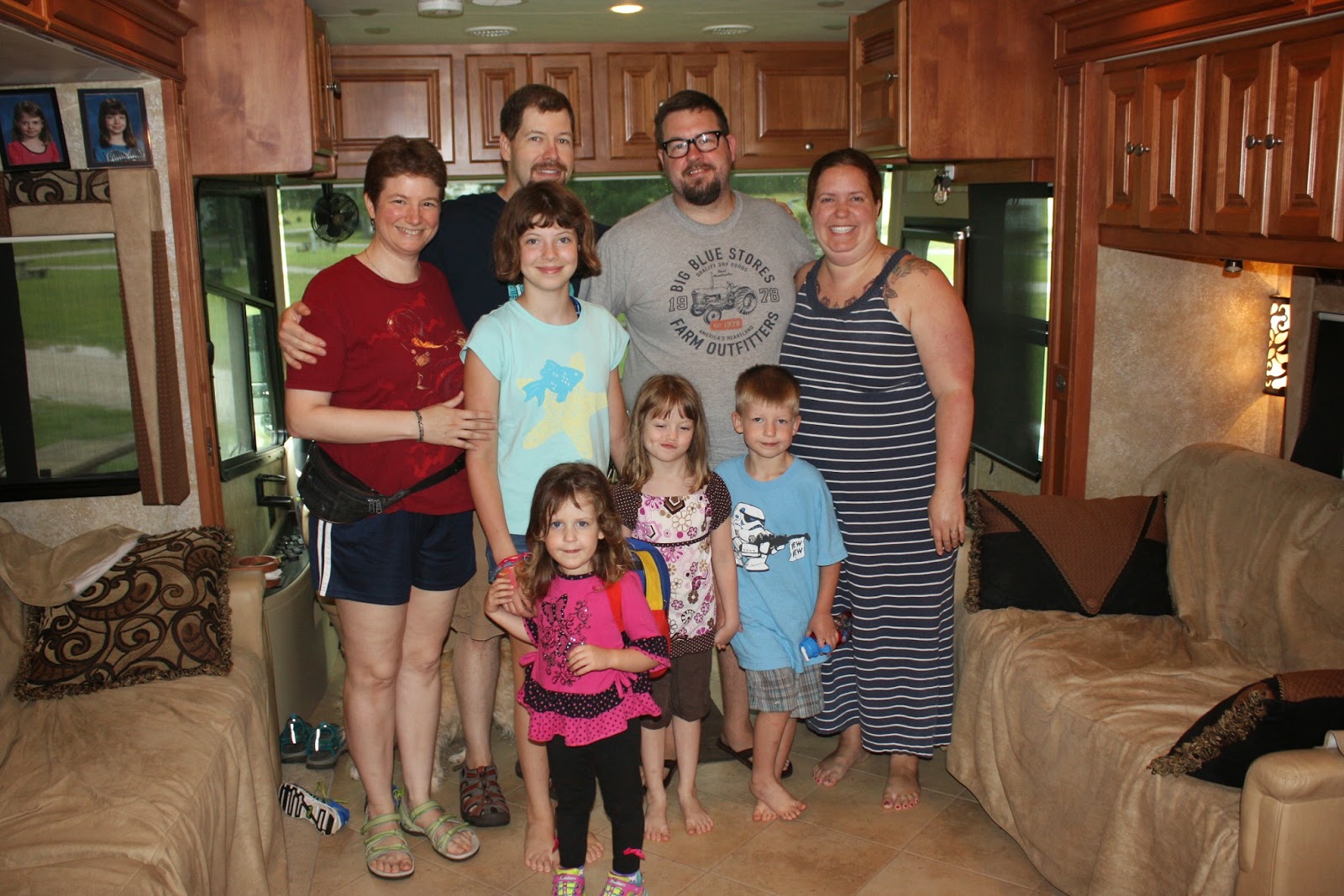 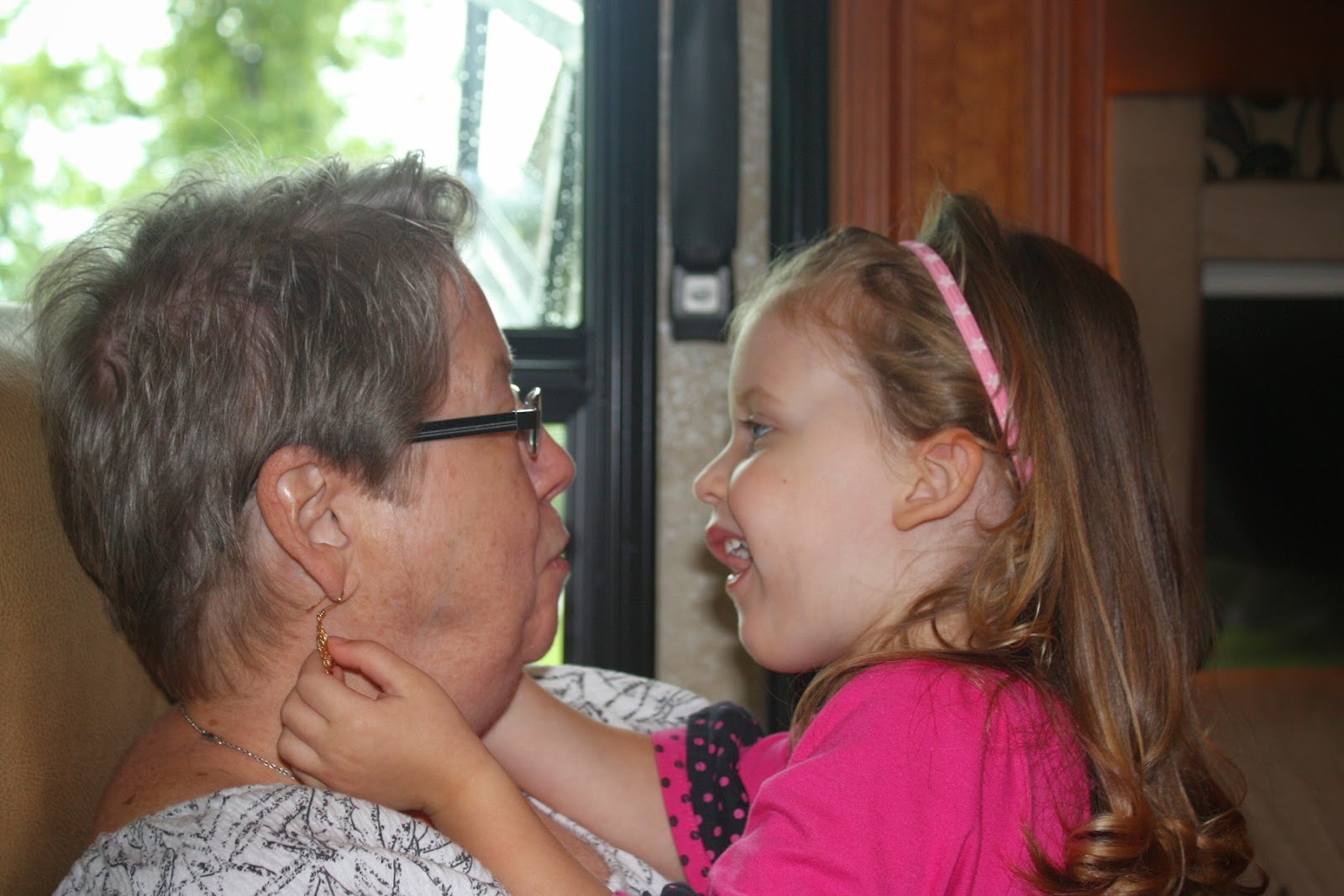 A Meemaw and Emory moment. 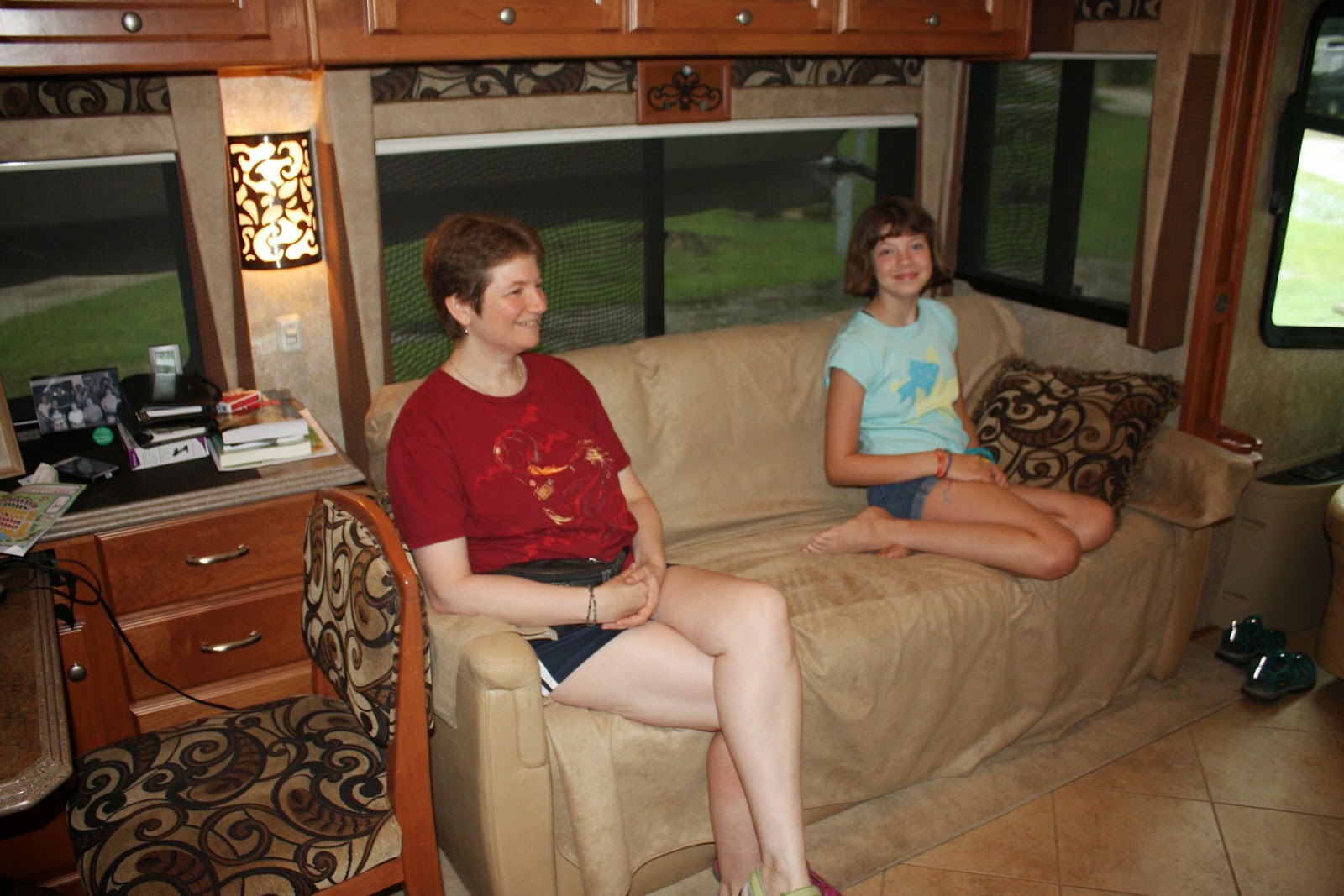 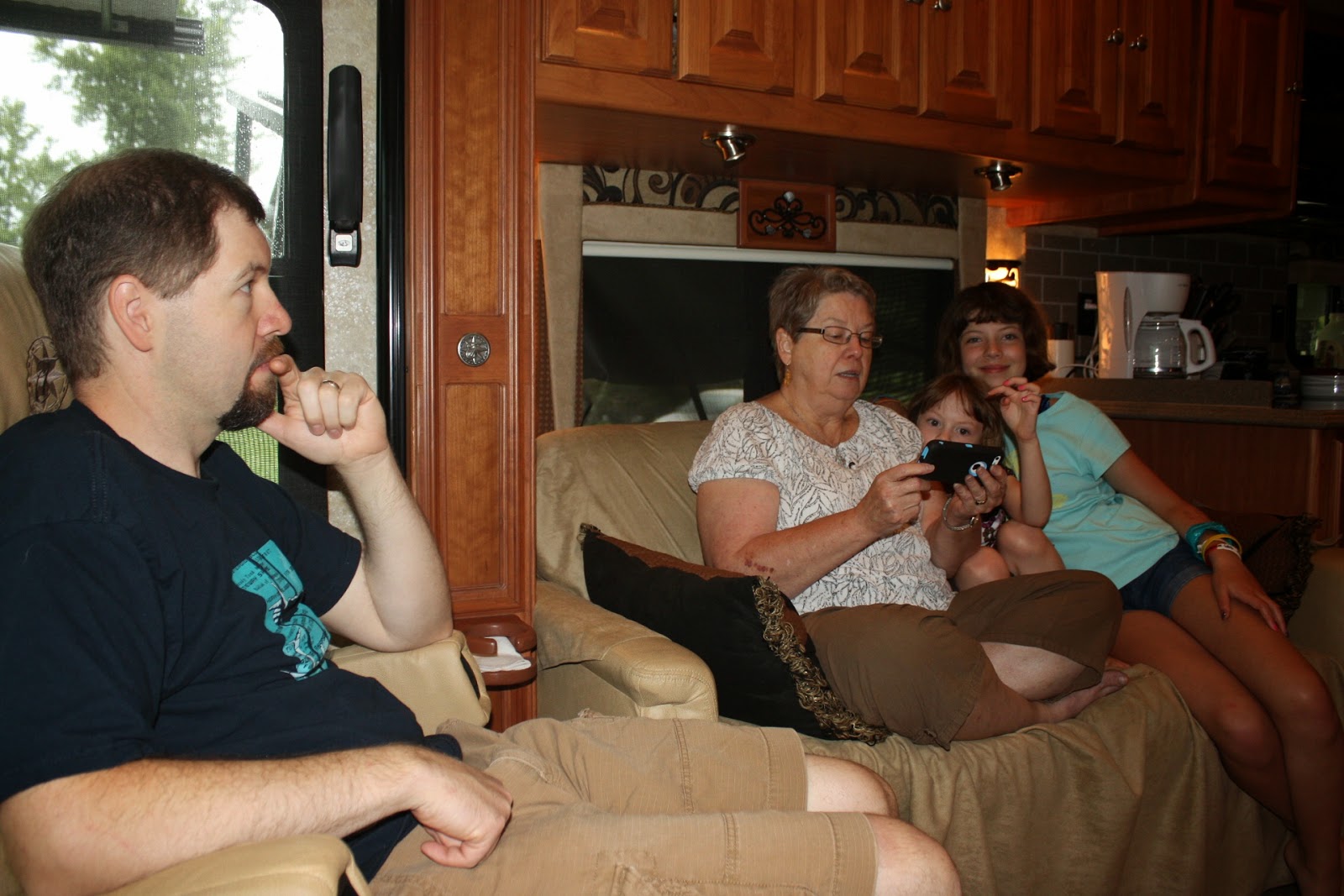 Don looks on as Kaylee and Dot show grandma pictures and videos of themselves. 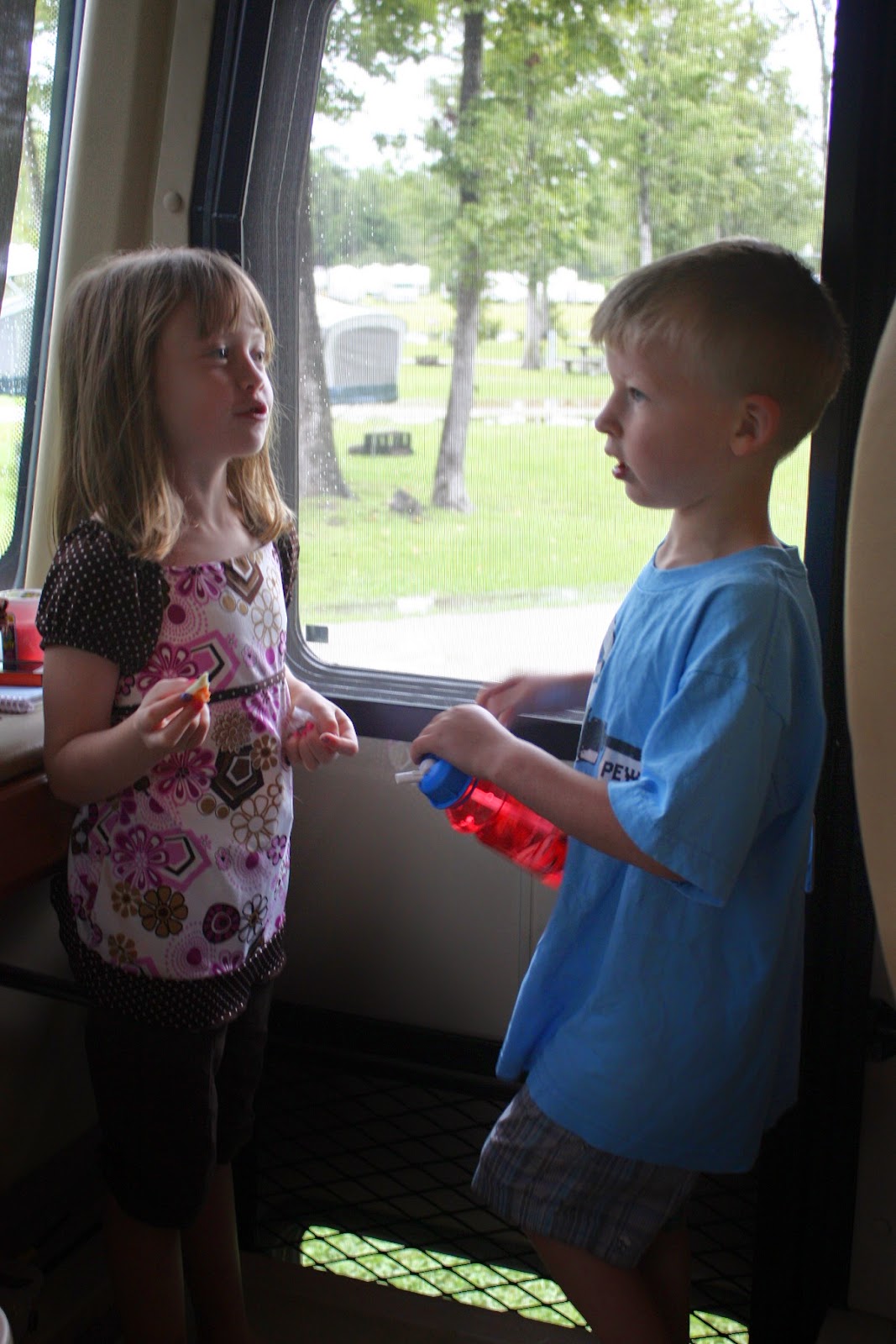 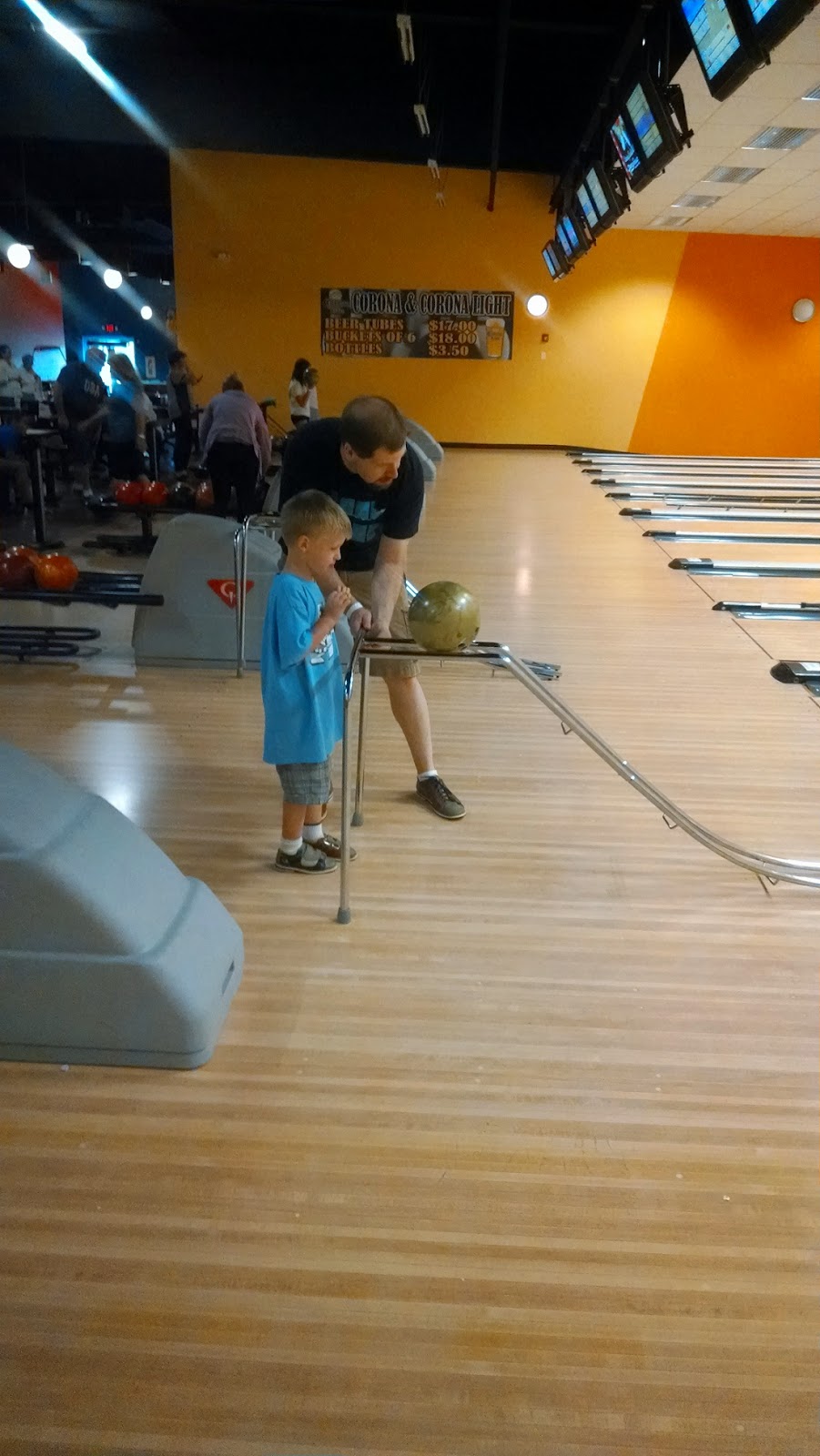 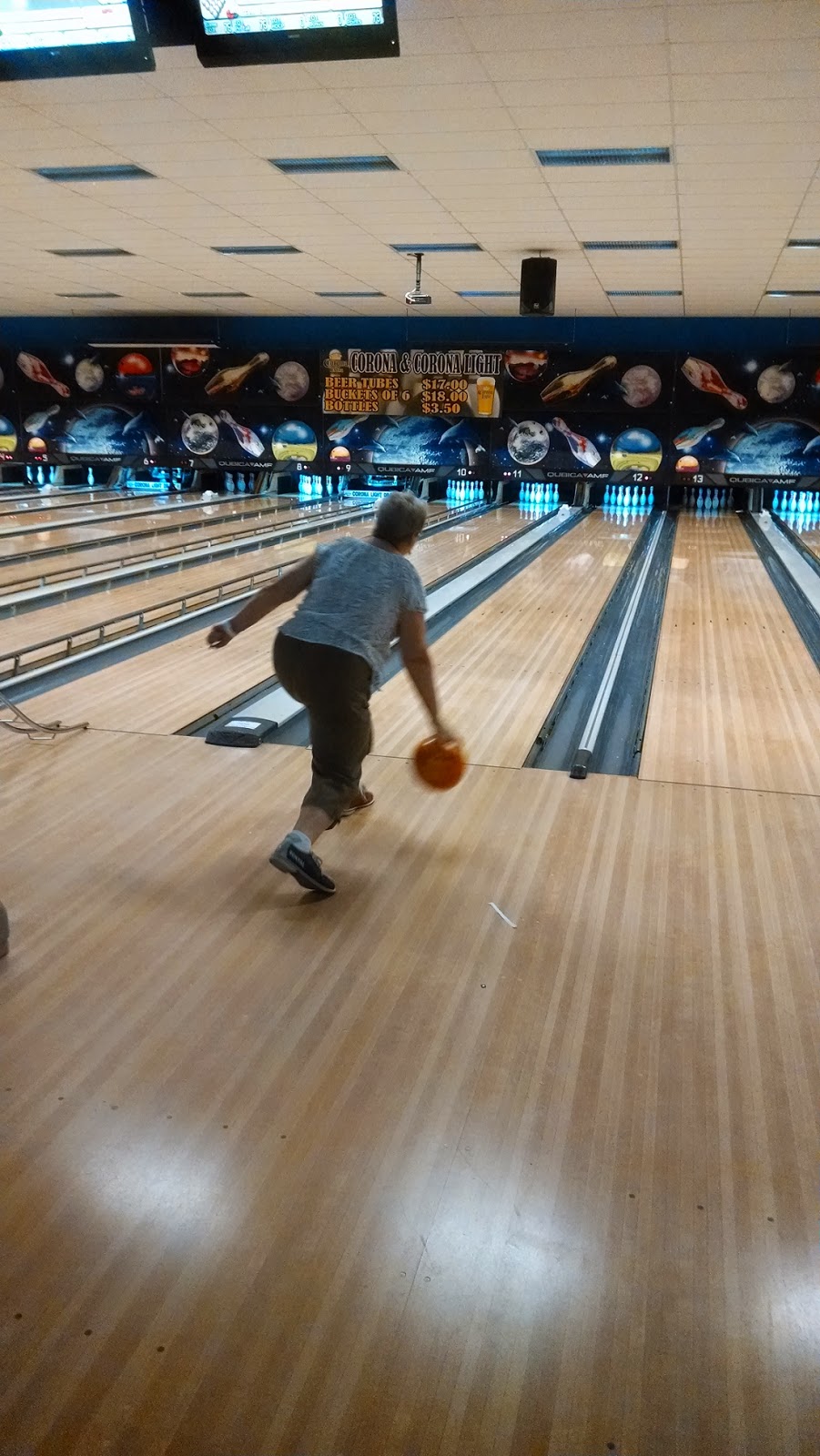 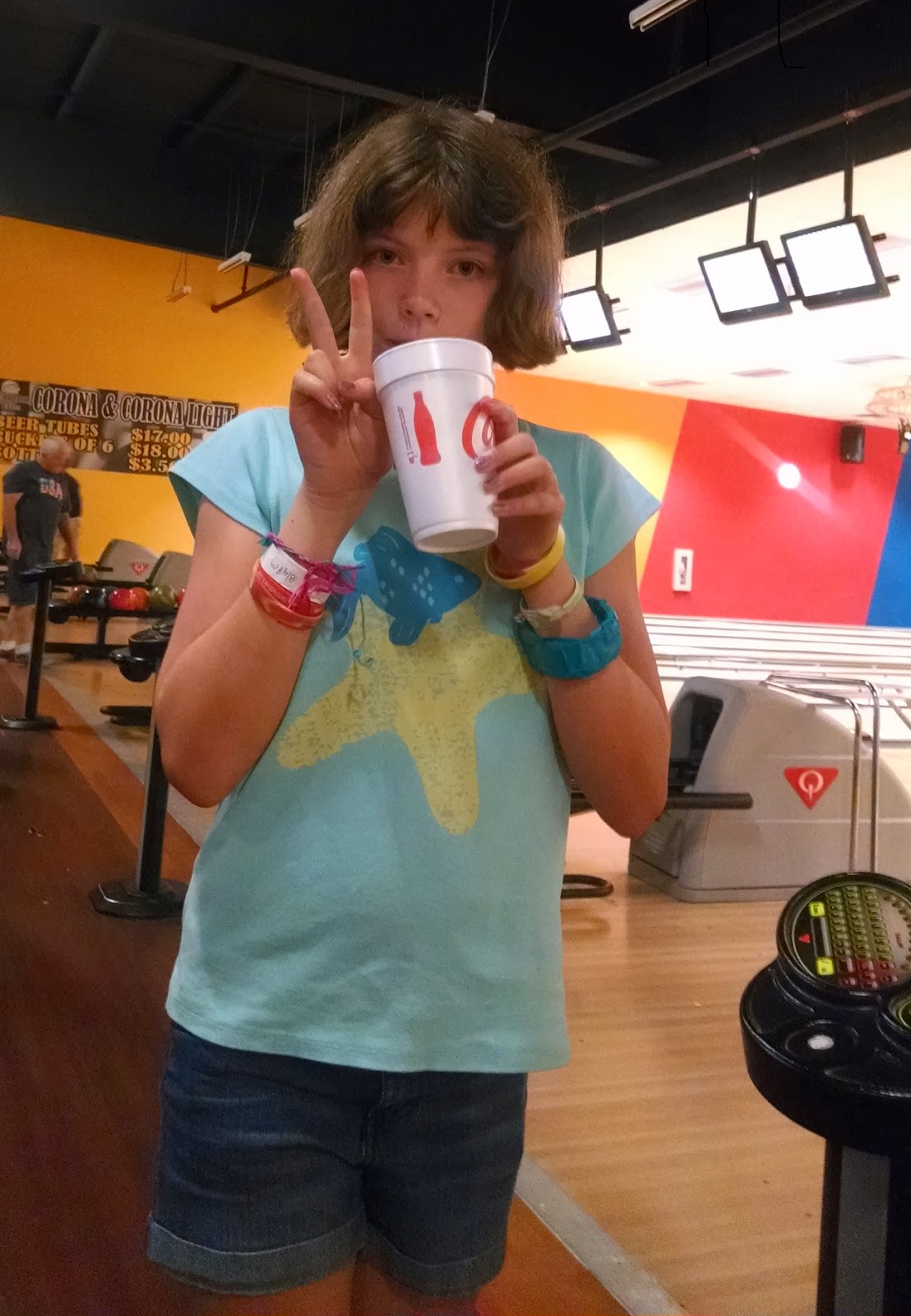 Dot gets some refreshment while she waits for her ball and hopes to pick up her spare.
It's not raining today so I hope we get some drying out weather for the next few days.  We will be here for the next couple of weeks and hope to see the kids several more times.
﻿
﻿

﻿
Posted by Phaethtofulltime.com at 9:15 AM