May I introduce you to Hope. Yesterday afternoon on our way home from seeing one of our doctors (nothing serious, just routine and we wanted prescriptions filled before we take off) we stopped off at CARMAX to see what they had in the way of Jeep Wranglers.  We found a 2013 Wrangler Sport with just 6,000 miles on it.  It looked like it may have been a dealer's demonstrator since a history search showed that it had never been sold to an individual.  The price was good and it is almost new; only the tires showed any wear.  God seems to have dropped this into our lap just like He did Phaeth.

Because we are waiting for proceeds from the house closing, we decided to go ahead and trade in Aubergine and take a loan for the new Jeep before anyone else scooped her up.  We will pay off the loan next month.  This way we did not have to go to the bank and move any funds around or dip into an IRA.  I have never seen a loan application go through so fast!  Literally in less than two minutes.  The sales person did not even finished entering information.  We looked at each other said, "It was meant to be".

Because we had not brought Aubergines' title with us (we were just going to "look", remember) we completed the transaction today. 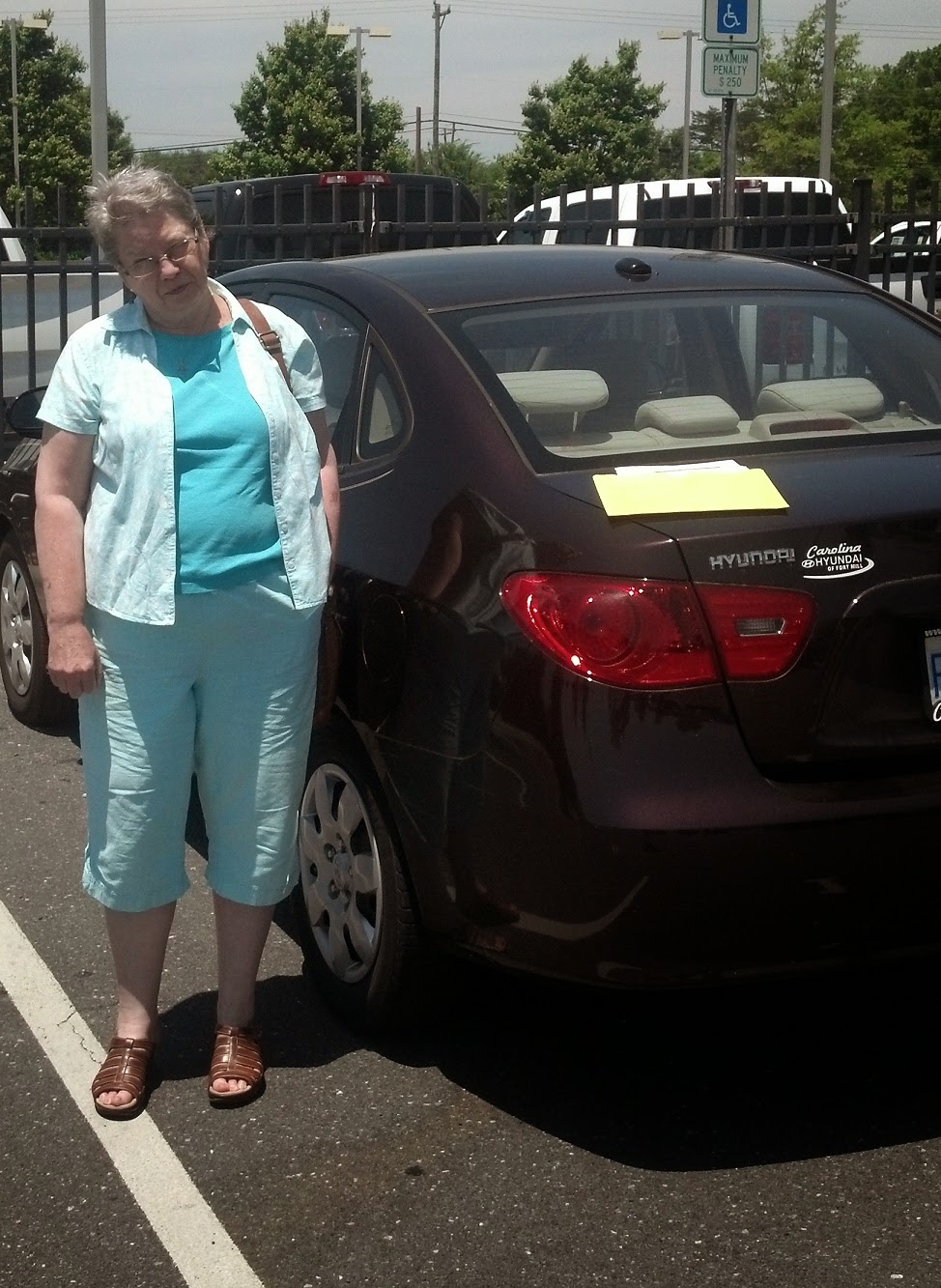 Aubergine behaved herself as we rode her for the last time to CARMAX.

Hope was waiting for us and we drove her home. 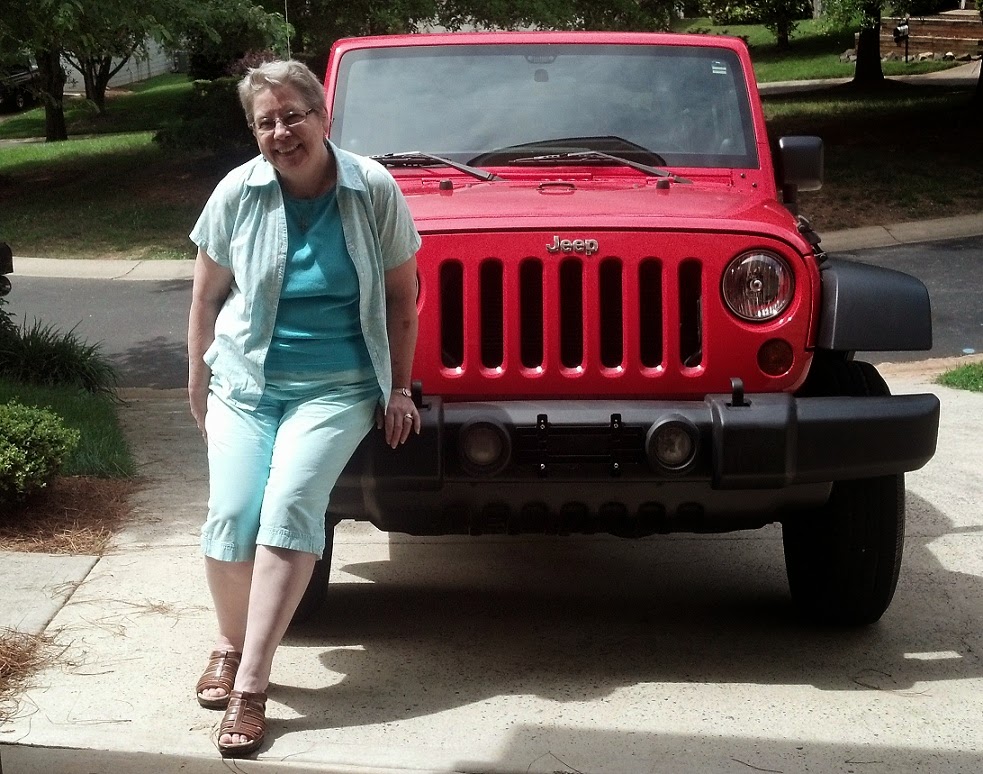 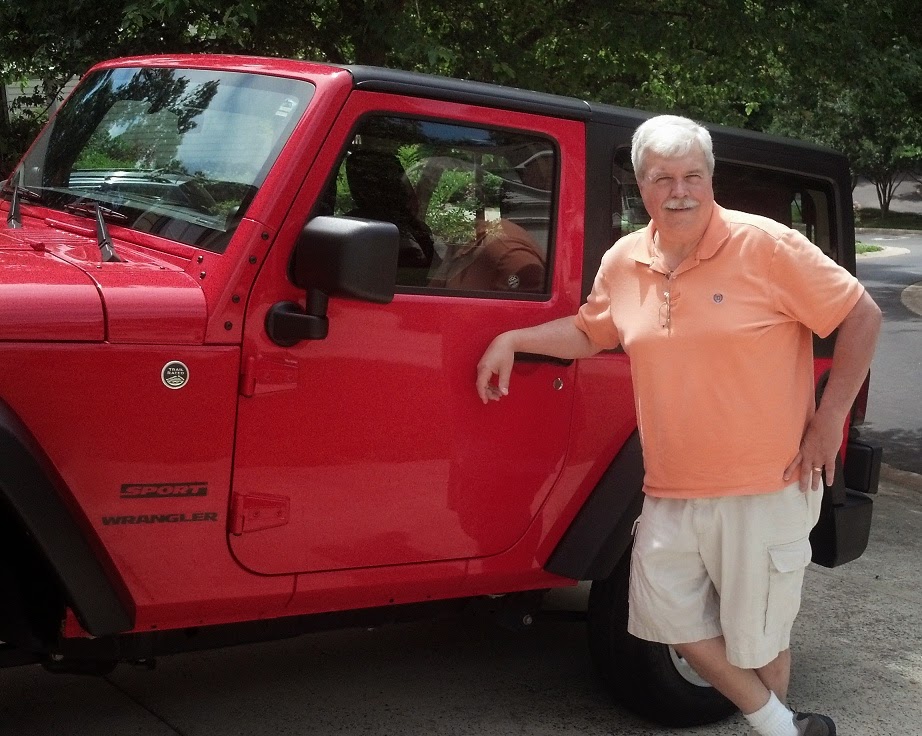 We thought it was only fitting to name her Hope as "with faith comes hope".  So as we drive down the road, first you will encounter Phaeth and then Hope.

We are now ready to fit Hope out with a tow package which we will try to do soon.

Making the Jump!  We are now "camping out" in an empty house.  We have just enough dishes, pots and pans and stuff so we can eat.  We have just enough clothes to be decent.  Because the new buyers don't have much, they are purchasing our dining room set so we don't have to eat off the floor.  We are essentially living down stairs sleeping on the foldout couch. Pretty good for a couple of old folks who want adventure.

The new buyers are also getting our washer and dryer and all kitchen appliances which make the adventure a bit easier.

We were asked "Why don't you leave now?".  The answer is: we are required by the homeowner's insurance to "live in the house" in order for it to be covered.  If we moved out early and something happened to the house, we would risk our claim not being covered.

We are just waiting for the closing now.  We have reservations at the local KOA and will move Phaeth there at the end of them month and will start to set her up for real then.  Immediately after closing we will trade in "Joanie's car" (named Aubergine) at get a Jeep Wrangler.  We will then have Camper Inn in Kings Mountain, NC to install the tow and supplemental brake package. That may take a week to 10 days to complete mostly waiting on the parts we want.

We still have to notify the utilities and newspaper to stop service.  I hope we don't forget any.

Posted by Phaethtofulltime.com at 8:18 AM No comments:

Busy.  Now that we have a closing date on the S&B house and the inspection required a few things to fix up, we have been busy.  My nephew, David, and my younger son, Chris, were here last weekend to remove the last pieces of furniture and my beloved truck. 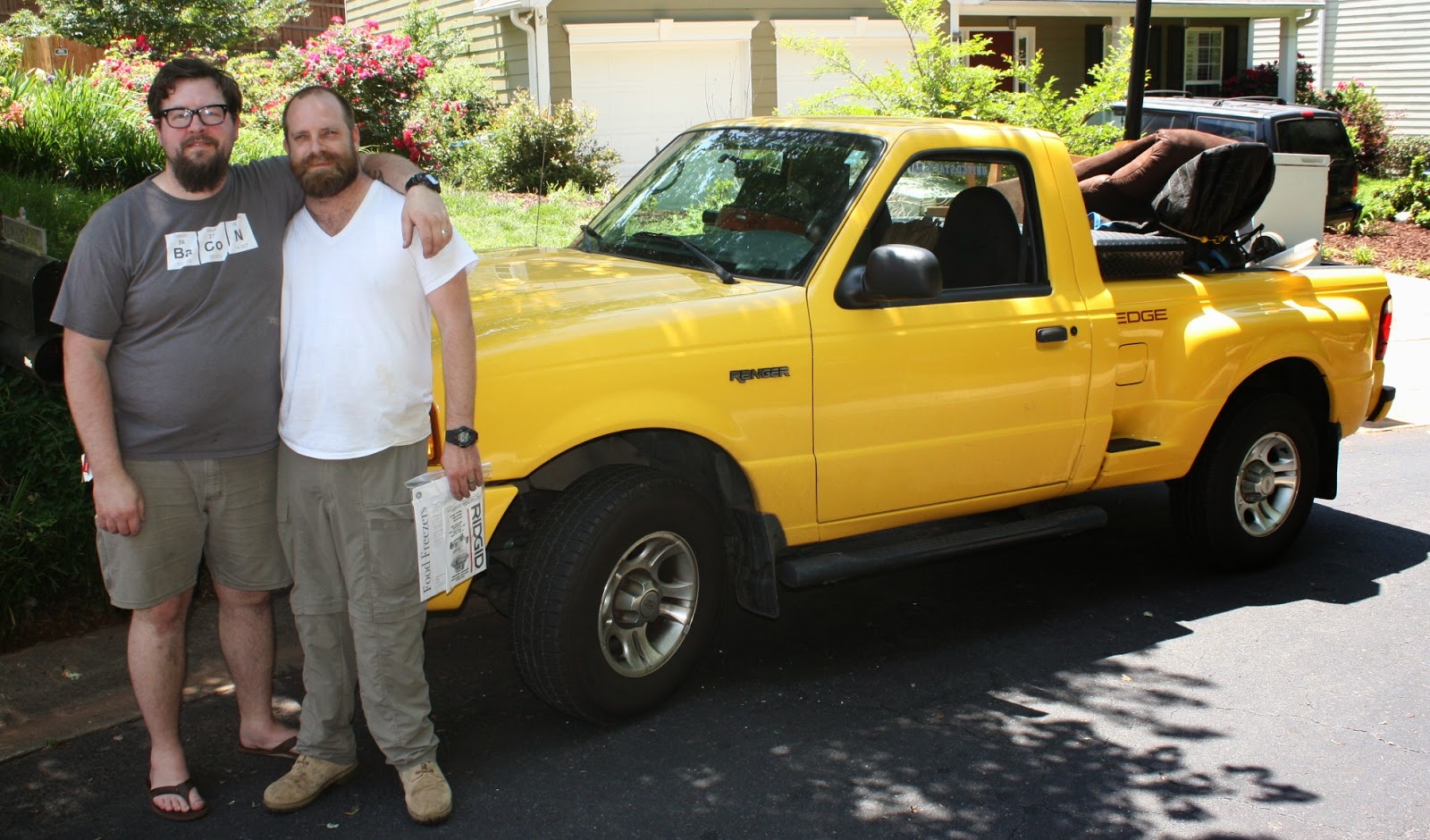 Now that is a milestone in our de-stuffing process.  If humans really can "love" an object, then I loved that truck.  At least I can say I was "attached" to it in practical way if not an emotional way because I did not shed any tears when David drove it away.  It was our "second car" that granted both Joanie and I our own independence. Now we only have "her" car until we trade it in when get "our" toad which will be in a couple weeks.  It kinda' brings us closer together.  It means that we will "share" more.  These are good things. 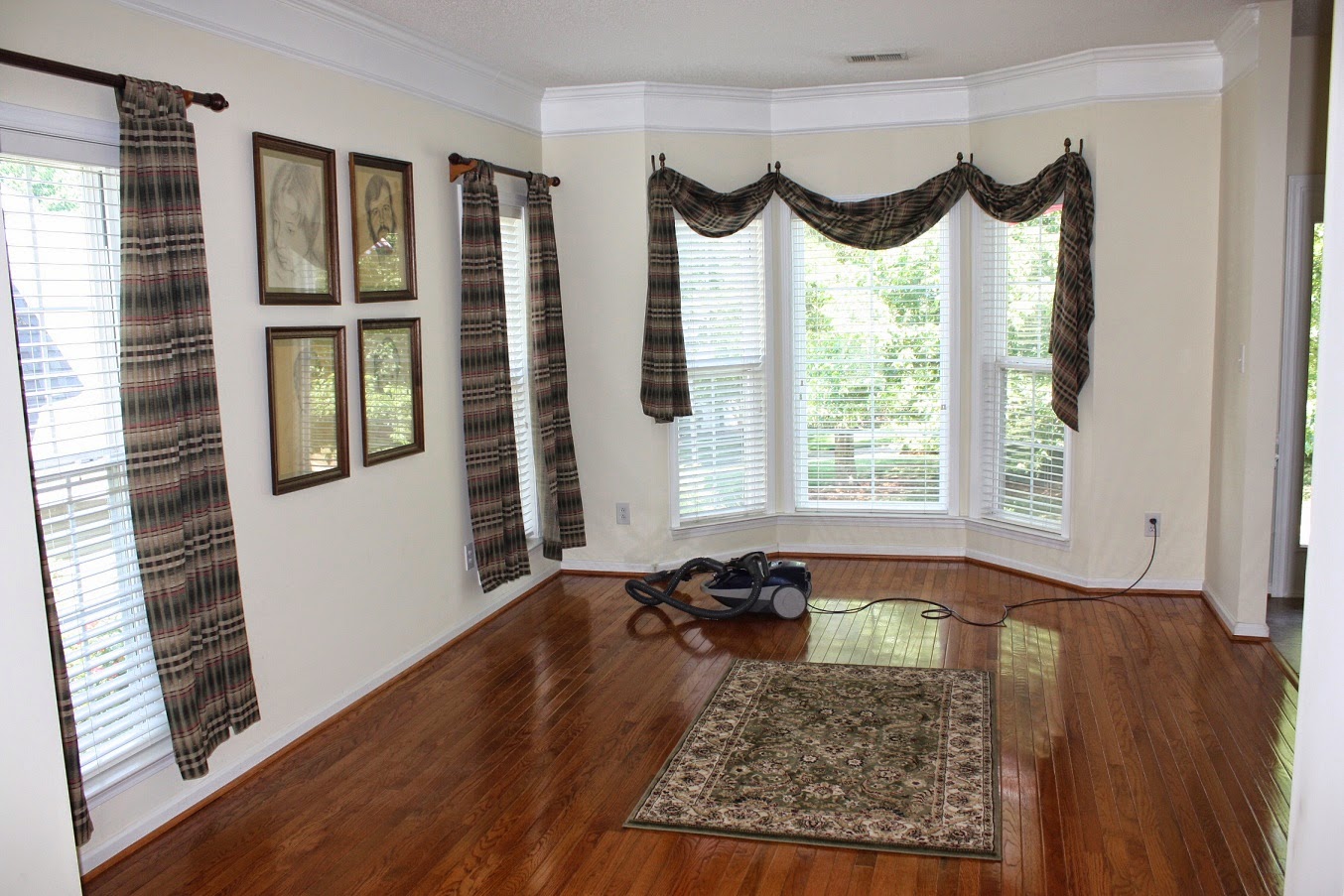 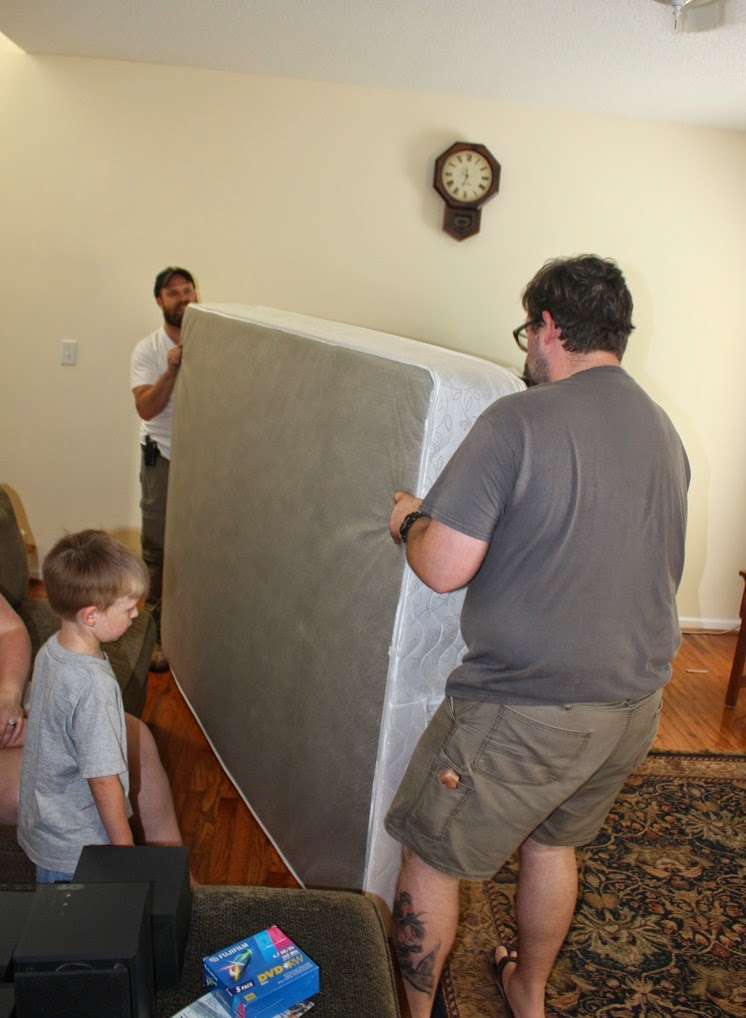 We are gradually moving into Phaeth and wish we could do it NOW!  But I must learn to practice the virtue of patience. In a way we have been blessed to be able to do all this over a period of time that does not cause us a lot of anxiety and having to do things "at the last minute".  The process has been almost leisurely and has allowed us to take the time to make good, thoughtful decisions about how to get rid of items or who to give it to.
﻿


Posted by Phaethtofulltime.com at 7:29 AM No comments:

Yesterday at evening Mass the congregation said good-bye to a couple of founding parishioners who had just sold their house in order to move into a progressive-care nursing home.  They are good people and I sang with them in the choir.  Because of what we are currently going through, I could not help but feel sad for them and maybe for myself a little, too.

When they retired years ago they were very active in the arts, their community and their church.  Now they are facing health issues that forces them to give all that up. They are accepting of the new lifestyle God has chosen for them.  I realized that I too will some day have to make the same decision.

By chance I ran across  a discussion on full timing on the TRVN forum http://www.tiffinrvnetwork.com/forum/viewtopic.php?f=107&t=62379 and saw that people who chose the full-timing lifestyle would all have to make similar decisions and should be smart about financially being able to transition away from full-timing.  In other words, having an exit plan.  For some, that means having the financial ability to buy a house, rent an apartment and furnish it or move to an assisted living facility.  Another choice is to move in with loved ones.

The point of the discussion is that everyone will be forced to make that decision and that transitioning back is a plan everyone needs to have.  Failure to plan is a plan for failure.

Does this plan steal your freedom that comes with casting yourself adrift?  I don't think so.  There are so many different outcomes to this lifestyle that you can plan without crimping your freedoms.  You can have a plan in your hip pocket and when the time comes you can execute it.  Just have a plan.

Posted by Phaethtofulltime.com at 11:57 AM No comments:

May 4, 2014, Sunday. I was just reading an article by Stephen Hawking on A.I., artificial intelligence. It seems that Mr. Hawking has of late taken to publishing his opinion on more issues than he is qualified and the media jumps to disseminate his ponderings as fact because they think he is the smartest man in the world and that everything he says is dogma.  They forget that his area of expertise is THEORETICAL physics, a practice more akin to science fiction than reality.

He now has extended his opinion to predicting the future of mankind.  His thoughts on A.I. are indeed interesting and any Hollywood producer worth his salt would jump on Mr. Hawking's ideas and make a good movie about machines enslaving human kind.  Yes, I know it has already been done and Hollywood has already blown holes in Mr. Hawking's theory.  In my humble opinion his theory leaves out a few very important elements which are very human.  Machines may indeed out-think humans in the future, but machines will never be able to out-human humans.

Einstein pointed out that insanity is the repeated performance of an action expecting a different outcome.  This is a very human condition that any A.I. would never ever be able to deal with.  We often call this human character trait perseverance.  A.I. would perform an action and failing in the expected outcome, cease.  This is the difference between humans and machines.  Humans have a soul.  The power of the soul cannot be fathomed either by machines nor, evidently, Stephan Hawking. Humans will always be superior because of the soul.

We were reminded of this yesterday when we received a phone call from an old friend who had been trying to pass the test to get into a nursing program.  She had tried several times to pass this test and someone else might have given up.  But she had faith both in herself and in God's grace to bless her with "another chance."  Faith is a gift given to just us from God that we can either accept or reject.  Candle, our friend, accepted the gift and used it; a character trait certainly to be admired.  WAY TO GO, CANDLE!
Posted by Phaethtofulltime.com at 6:54 AM No comments: